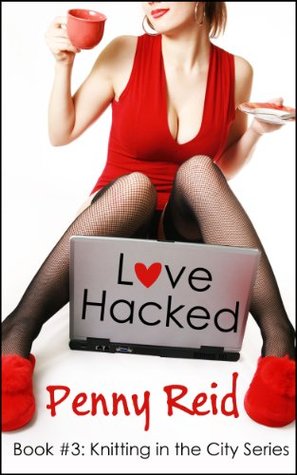 “My name is Alex and I’ll be serving you tonight.”

Penny Reid has become a go-to gal for me when I’m in the mood for a light romance. I have read more than a handful of her stories and have not disliked any of them, which is pretty much a miracle if you know me at all. I’m living proof that you don’t have to read her stuff in order either. I pick up what I call “The Bearded Brothers” in whatever order they come to me and I had only read #6 in this series before requesting this #3. I will say I’m not a knitter so the knitting club (as well as some of its members) aren’t necessarily my cuppa. The good thing is you can just skip the characters you don’t want to hear more about like I did and go right for the one that made you want to take your pants off : )

Our leading lady this time around is Sandra – shrink by day, dating failure by night. For the past two years she’s been taking potential Mr. Rights to a restaurant near her house where she gets dolled up, orders the butter chicken and . . . . then proceeds to make them cry like tiny little bitches. Alex is a waiter at said restaurant who has watched these near-weekly failures with more than simple curiosity. Sandra and I share the same feelings when it comes to Alex . . . . .

“He gives me zings in my things.”

Now let’s cease with the talky and get to giffing to ‘splain why this worked for me.

1. Not only was our female lead a doctor who actually had her shit together, but she was also significantly older than the leading male which made me go . . . .

3. I was also familiar with him from Book #6 and his storyline was most definitely a delightful blast from my past . . . .

4. Not to mention he was described as looking like both this Henry Cavill . . . .

5. Back to our leading lady. Her claim to fame was a collection of oddball t-shirts. To say I could relate might be an understatement . . . . 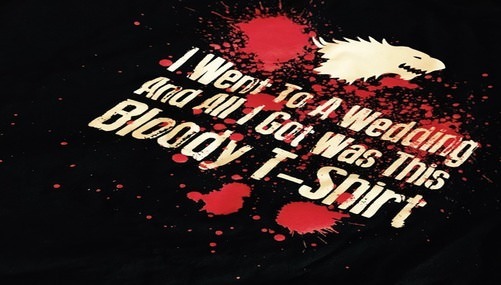 Starting right around the mid-point.

To sum it up, Reid delivers what I order: an actual plot, well developed characters (including friends – not just the two leads), females who aren’t pushovers, males who might be a little alpha – but who don’t behave like cavemen, just the right number of pages and a bonus in the form of some LOL-able funny for good measure . . . .

“I like how you say my name. I can’t wait to hear you scream it.”

ESPECIALLY when it came to the realistic reaction to a ginormous wang . . . .

“No. Do not want. Please un-supersize my order.”

This time around she even offered up a trip down memory lane in the soundtrack that my family is hoping will get out of my head so I stop singing and gyrating all over the house . . . .