A Feast for Crows by George R.R. Martin 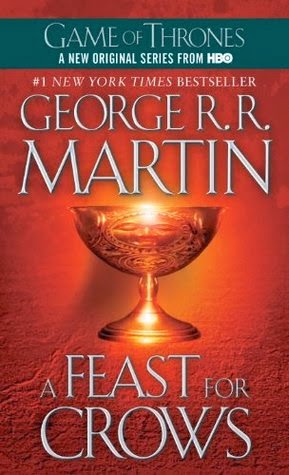 5 Stars
By now you all know I’m reading the box set and not giving a real review until I’m done with the hole batch and yada, yada, yada. That being restated, in place of a review (which would be all “why do people not like this one? I mean, yeah, book 3 was nearly impossible to beat, but this one was damn solid writing and how many authors can start a freaking remodel of a series and make it work and who would have known that I would love a Lannister and rantrantrantrantrantrant . . .”) I’m going to teach you how to make an awesome Pinterest craft that was inspired by alcohol my Goodreads buddies JennyJen and Andrea Ninja Bunneh :

The idea is to take a page from your favorite book and turn it into cheap/free art in your reading room.

Second, blow up said picture to the size of your choice (mine is 11x17 because that’s as big as the copy service at my office can make it and I’m too damn cheap/lazy to go to Kinko’s):

Third, brew a cup of tea:

Fourth, put the paper on a cookie sheet (another reason why 11x17 is a good choice) and cover with tea:

Let soak for 5 minutes while warming your oven to 200 degrees. After the paper has soaked, you can manipulate it by tearing, wrinkling, etc. to give it an “aged” look.

Fifth, drain off excess liquid and bake in the oven for 7-10 minutes. If you’re a pyromaniac you desire, you can burn the edges of the paper for an even more weathered appearance after it is completely dry. All that’s left is sticking it in a frame:

And there you have it. A nearly free art project that will have all your friends asking “what the f^#* does Hodor, hodor, hodor mean??????”

A craft so simple even Mitchell could do it. Well, he could if he were more than just a head. (He says we should hang a page from Everyone Poops above the dumper. That Mitchell - he always keeps it classy.)

A Storm of Swords by George R.R. Martin 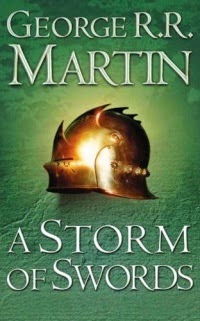 Okay, not really. There's still a shit-ton more pages after this.

A Clash of Kings by George R.R. Martin 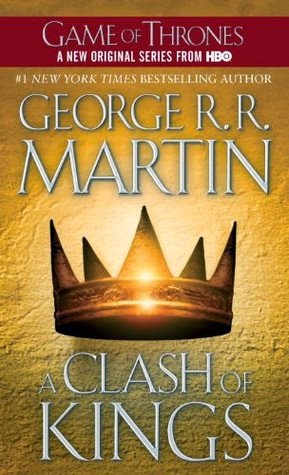 5 Stars
Once again, I'm reading the box set, so this is not a "real" review (yes, I know it's a stretch to say any of the rest of my reviews are real reviews as well).

This is where the fun begins. The book where the incest jokes can really start rolling, where you get a hint of all the stabby-stabby that is soon to come, where you find yourself routing for some of the bad guys. 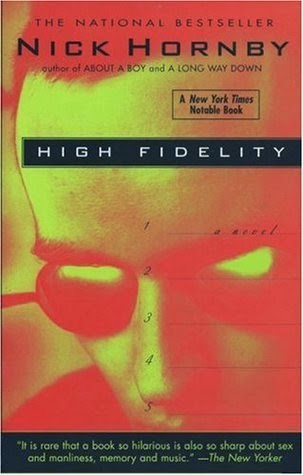 3.5 Stars
"I’d like my life to be like a Bruce Springsteen song. Just once. I know I’m not born to run, I know that the Seven Sisters’ Road is nothing like Thunder Road, but feelings can’t be so different, can they?"

When Rob’s live-in girlfriend walks out on him, he’s left questioning all of his relationships and what led up to this point.

When I first read High Fidelity umpteen years ago, I thought it was a home run. Grand slam, even. Nick Hornby was new to the writing scene and British and young and British and had fresh material and was British and wrote hip characters (that were British) and I was smitten. Now that I’m old and jaded (and not as easily impressed by all things on the other side of the pond), this re-read wasn’t quite the home run it was the first time around. It was more like a double with an error that allowed the runner to advance to third.*

However . . . My appreciation for Hornby’s talent will not allow me to rate any of his books below 3.5 Stars, I have nothing but admiration for his ability to write “anti-love stories,” and my adoration for Rob, the MC, remains strong. I believe High Fidelity may have provided me my first experience of being 100% annoyed by the narrator and so happy to not know him in real life, while still wanting to hear his story and being fascinated by his crybabiness (made up word??? yep, I'm going with it) rather than wanting to kick his ass.

Yes, Rob, you are indeed, but somehow Hornby always makes characters like you work.

Book version recommended to? The recently dumped or pessimists in general.

Movie version recommended to? Anyone who likes John Cusack films. While you won’t get a moment like this:

Rob Gordon’s whining is significantly tuned down and Jack Black shines as co-star.

*After spending what seems like an eternity at various little league parks, my apologies for the baseball terminology.

A Game of Thrones by George R.R. Martin 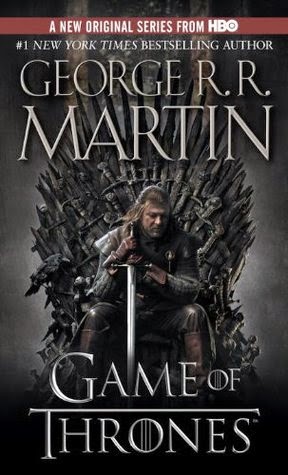 5 Stars
George R.R. Martin is a wordsmith and I am not. His stunning prose leaves me with only one thing to say in my review*:

*Please note I’m taking what I’ve dubbed the “30 Day Nerd Challenge” (suck it, all you Facebookers posting about your fitness quests) and will write one giant, rambling, fangirly review once I’m finished with all 5 novels currently in the series.

Sex in the Title: A Comedy about Dating, Sex, and Romance in NYC (Back When Phones Weren't So Smart) by Zack Love 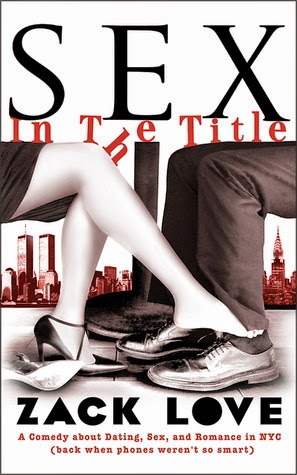 1 Star
Once upon a time, in a land far far away there lived a girl who wrote one-line reviews and was flattered to receive a request from an author to read/review a new book for free. Once downloaded, the girl immediately forgot about said freebie and continued making her thrice weekly treks to the local crackhouse library (stole that from Shelby). Months passed and the girl began to poke around on her Kindle only to find this forgotten title. She figured it was high time she read it – and was instantly reminded why she has since made a policy to say no to author requests.

Sex in the Title was clearly aspiring to be something great. In fact, 85% through the story there’s even a reference to said greatness:

Sadly, this little tale was not so money that it didn’t even know it.

In “Swingers,” Trent and his friends are total d-bags, but Favreau’s timing is so spot-on and his characters so over-the-top that it’s instantly forgivable and you still pretty much want to bang them (especially Sue. Good godamighty Sue). The same can’t be said for Evan and his friends in Sex in the Title. They’re just pretty much douchebags and are so one-dimensional that it can’t be overlooked. Kind of like:

This book was supposed to be a funny take on romance/relationships from a male perspective. It wasn't. The characters were so schmarmy that each chapter left me feeling like I needed to get tested for the clap without even touching them. And the humor? Sophomoric would be a step up (and I’m a gal that generally loves some lowbrow humor). There’s just nothing good I can say about this one : (