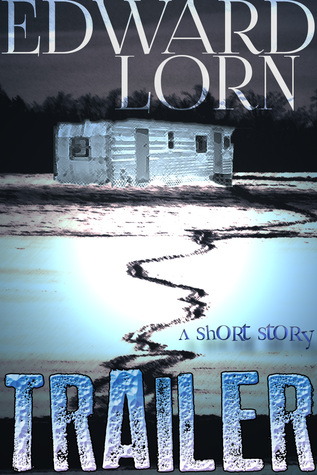 If you’re currently residing in an Arctic Tundra where the daily snowfall is measured in feet rather than inches, you might want to put Trailer away until the Spring melt . . .

But if you’re lucky enough to live in flyover country where the daily temps have been hovering around the 70 degree mark, you’re probably ready to feel a little chill.

And what a chill you will feel. Right down your spine. This story is only 16 pages long, so I’m not going to give much away. As the blurb says: “The less you know, the better.”I will say that I hate short stories. Almost as much as I hate that godawful Zulily ad that pops up every time I log on to Goodreads with the chubster in the white stretch pants. As a chubby woman I can say the following with respect to the okay-ness of that outfit: IT’S NOT!

Now where was I? Oh yeah, hating shorts with a fiery passion. Somehow Edward Lorn makes these brief glimpses into his characters’ lives feel so much longer than a few pages. Not to mention the fact that his momma obviously didn’t teach him to write about no sissies . . .

Hell yes, she will. I’ll never look at “cranberries floating in cream” the same way again . . . but I might tell my husband to give this one a little gander and then offer him up a bowl full if he torks me off ; )

You want to know the best part about reading something by Edward Lorn? One of these days I’ll be able to say “I knew him when.” It’s not a question of IF he’ll make it big. It’s a matter of WHEN he’ll make it big.

DISCLAIMER: I know Edward Lorn. I’m proud to call him my friend. I don’t rate his books due to this relationship (but if I had a gun to the head moment and had to rate this one I’d give it all 5).

This story was Kelly tested and Mitchell approved!