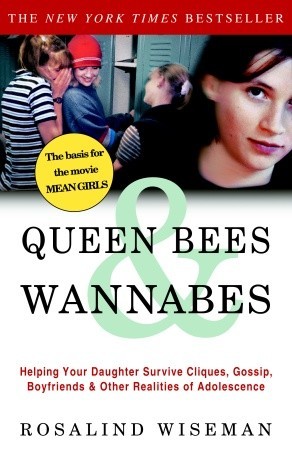 3 Stars
Remember the dreaded “video” you were forced to watch in 5th grade, right before you started pubin’ out and became horrible? Schools should eliminate that and add a mandatory class on how to survive “Girl World” to the curriculum instead.

Queen Bees and Wannabes is the first parenting book I’ve ever read. I never bothered with all the Dr. Spock nonsense. I mean really, who would trust a VULCAN to give the right advice about parenting? They don’t even have emotions for God’s sake!

As a mother of boys, this obviously wasn’t a book geared toward me. I do, however, often get asked if I’m “sad I never had a little girl” or if I “want to have one more baby.” Well, to be blunt the answer has always been “if I had the money to spin my husband’s man juice in a centrifuge and kick all the potential girls out of the baby gravy then . . . maybe.” This book confirmed those feelings . . .

From the basics of mean girl behavior like gossip and slut shaming to more complex issues like drugs, alcohol, and sex - Queen Bees covers nearly everything. And while most of the advice seems to stem from basic common sense, if there’s one thing I’ve come to realize about ‘Muricans is there’s a good chunk of them that have none of it. Those people should flock to the bookstore stat in order to purchase this book.

Personally, I love the common sense approach to parenting. No offense to all the religious zealots out there, but I’m not one of you so if I wanted a “godly” parenting book I would go to the Christian Book Store and pick one up (or I would just ask Tom Cruise).

I was lucky, I guess. I never experienced much of the “mean girl” world as a kid. I was actively bullied one time. In Junior High School I was approached before school by a girl I knew from Adam who informed me she would be kicking my ass after school. Well, she didn’t, but she continued to inform me daily that she was still planning on it. My own private Dread Pirate Roberts.

Good news to any youngsters reading this – if your bully is anything like mine she’ll get what’s coming to her . . .

Ha! Not really, but there’s a good chance she’ll end up an unemployed loser with a bunch of kids in 20 years : )

The basic goal is to be aware of what position your daughter is playing in her social hierarchy in order to help her navigate adolescence effectively. If you are unfortunate enough to be raising a “Queen Bee,” how to attempt to turn her into one who uses her powers for good rather than evil . . .

Or if your poor kid happens to be the bullied rather than the bully, to hopefully get her to a point where she can say . . .

Bottom line, parents need to actively work on helping to create less of this type of girl . . .

Oh, and stop trying to be your child’s BFF. It is your job to keep them from being assholes – and if you find out they ARE being assholes, it is your job to actually follow the advice in this book and make them own up to it and apologize. I’ll gladly take the “I hate yous” or being told “I’m the worst” (there’s a tiara with that written on it just for me) if it means my kid didn’t ruin someone else’s life.
Posted by Kelly (and the Book Boar) at 11:57 AM