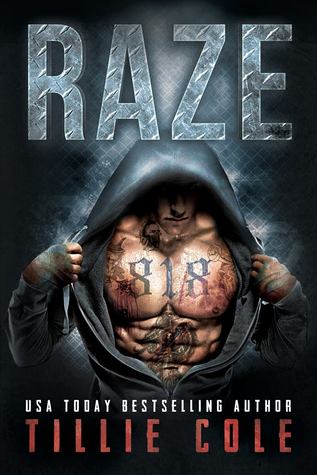 As some of you know I've been doing my local library's Winter Reading Challenge in order to score a new coffee mug. My satisfaction with the recommended selections of said challenge have been less than stellar. To top it off, on Thursday I discovered that my reward for completing the challenge this year wouldn't even be a coffee mug. Instead it would be a cocktail glass. I was already tired of waiting for my final "romance" selection to queue up, so I opted to read some porn in order to turn in my paperwork early and get the f-ing stupid glass . . . and so the drunken review of Raze was born. Bottoms up!

Quick question before I get started. How many of you have ever referred to the lady garden as the "channel"??????

Right. That's what I thought. We'll get back to that a bit later. Now on with the review!

Here's the problem. If I were rating the plot, this one would get a solid 3.5 Star rating. The premise is this dude has spent half his life in the Gulag - he has been drugged, brainwashed, and forced to fight to the death in an underground fighting ring in order to survive . . .

Oh right, my apologies. Anyway, "that of which I shall not speak" was good. Super brutal and the action was intense. It might've even been good enough to score a 4 Star if the prisoner weren't known as "818." Now, I'm sure I'm in the minority with this weird knowledge, but anytime 3-digit numbers are referenced I think of zip codes, and this particular zip code is for The Valley . . .

Random, but those are the things that stick in my pop-culture addled brain.

Long story even longer, Prisoner 818 has one goal in life - to seek revenge on a man he remembers nothing about, except for his name. Whilst seeking revenge 818 (a/k/a "Raze") finds himself joining another fighting ring (known as "The Dungeon"), but this time it's led by the Russian Bratva. As he sets his sights on revenge, Raze finds his eye also drawn to Kisa, the woman who helps run The Dungeon.

I'm sure you can figure out what happens next. You guessed it, it's time for some bow-chicka-wow-wow. Unfortunately, one of my friends just decided to leave Goodreads, but I think he said it best when he said the cover looked like a "tiger in a hoodie." Yep. And I wanted to bang that tiger. What I didn't know was that the parts of the book discussing the naughty business would make me feel a little something like this . . .

And that I would learn everything I never wanted to know about Kisa's "channel" . . .

If you want to have a lot of fun while reading this one, take a drink every time anyone talks about the "channel" . . .

But whatever you do, don't add any other icky words to the game. Drinking during "channel" talk might result in something like this . . .

But if you add in references to Kisa's lady bits being called . . .

(Spock does not approve of such pussy talk!)

Sidenote: Someone asked me to work this .gif into a review a long time ago. NAILED IT!

Where was I? Oh yeah, don't add any pussy speak to the drinking game or else you might find yourself in Pam Poovey territory . . .

Speaking of Pam Poovey, I think Kisa must have taken some notes on how to have a "successful" sexytime from my pal. If references to . . . ummmmm . . . moisture squick you out, bring a barf bag . . .

Recommended to those who have a lot more experience with dirty books than lil' ol' me.
Posted by Kelly (and the Book Boar) at 11:57 AM