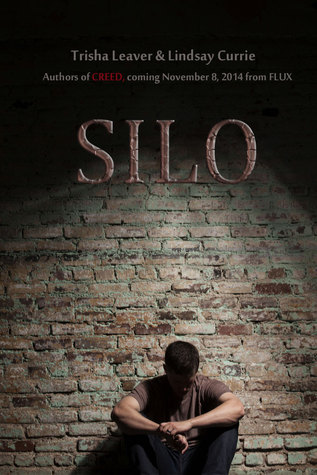 4 Stars
If you’re looking for a YA selection that has very little of this . . .

Before I begin this review, here’s my full disclosure about my relationship with one of the authors . . . We went to high school together. However, we haven’t seen each other in twenty I mean FIVE (yeah definitely 5 because we are still super young) years – and I requested her other book Creed without even realizing it was the person I know until the day before the release date. Basically this is the longest way possible to say that I don’t let personal relationships with authors influence my reviewing. EVER.

Because the author and I grew up in a small town where if you drove for 10 minutes in any direction you would find a cornfield (reserve your “Children of the Corn” jokes for someone who hasn’t heard them a time or twelve), I assumed SILO meant this . . .

(But hopefully more stable since young humans were going to be residing inside it.)

Instead, I found out they were talking about an underground silo, kinda like this . . .

Ooops, my bad. So anywho, the MCs (Jake, Evan and Keith) have been holed up in said silo for nearly a year after a solar storm wiped out their school bus (and everything else in the way), leaving them stranded hundreds of miles from home (if there even is a “home” anymore). Now they live in a world where every man fights for himself and the only way to stay alive is to scavenge/steal supplies from others. When they find a beaten girl in one of the silos, the three boys rescue her from her captors . . . who don’t take kindly to having their most valuable possession stolen.

I’m going to start with the problems I had with the story. First, the blurb says “a solar storm plunges the world into total darkness.” I’m not sciencey (like, AT ALL), so I have no clue what a “solar storm” is or what happens during and after it. I pictured it kinda like this . . .

There were also phrases like “without the sun to mark the sky, you couldn’t tell up from down, east from west” to help me figure out what the new world was like . . . But then there was also talk about getting home before sunset. Inconsistencies like that confuse my tiny brain. There also wasn’t much discussion about why the boys never tried to get home ASAP after the storm, which bugged a little.

I also noticed some typographical errors and omitted words which resulted in awkward phrasing a few times. If I had paid for this story or if I found an abundance of errors, I would be a harsher critic, but in a world filled with Badly Behaving Authors, Leaver and Currie opted to offer Silo up on Wattpad (where it still remains for free) chapter by chapter each week in order to build a fanbase in a super cool way. With that kind of time crunch, two authors, and being something offered for zero dollars, I can excuse a few mistakes.

And then we get to the “didn’t see it coming” moment. I don’t get taken by surprise easily, and this one????

Nope. Totally didn’t and that little twist earns Silo 4 Stars. If you have a young person in your life who wants something a little older and a little darker, but isn’t quite ready to jump into the world of King or Koontz, this is a good choice. Bonus is Leaver and Currie have TWO new books coming out in 2015.