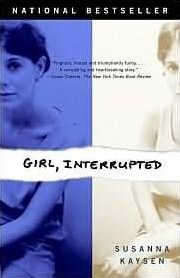 “People ask, how did you get in there? What they really want to know is if they are likely to end up in there as well. I can’t answer the real question. All I can tell them is, it’s easy.”

And boy was it ever easy for Susanna Kaysen to end up in a psychiatric hospital. Now, Susanna was not “normal” per se. She randomly obsessed about things as bizarre as whether or not she actually had bones in her body since she couldn’t see them and was battling depression that at one point led her to down 50 aspirin. She most definitely needed some help . . . But in the 1960s the form of help provided to young girls like Susanna was a long-term stay in the local looney bin where the Thorazine flowed like water and electric shock therapy was a sure-fire cure for crazy.

Although compact and a very fast read, Girl Interrupted is a haunting story that I won’t soon forget and will easily go down as one of the best memoirs I’ve ever read. And not only is the story fascinating (and a bit horrifying), but Ms. Kaysen’s writing is some of the most truthful I’ve seen . . .

“Suicide is a form of murder – premeditated murder. It isn’t something you do the first time you think of doing it. It takes getting used to.”

“I think many people kill themselves simply to stop the debate about whether they will or they won’t.”

“‘Today, you seem puzzled about something.’ Of course I was sad and puzzled, I was eighteen, it was spring, and I was behind bars.”