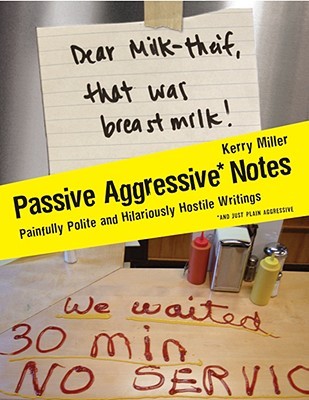 2.5 Stars
What better day than Valentine's Day to read a book called Passive Aggressive Notes, right? If you're like me and have been married since tiny 8 pound 6 ounce Lord baby Jesus was lyin' there in his ghost manger, just lookin' at his Baby Einstein developmental videos, learnin' 'bout shapes and colors . . .

If you've lived in the real world for more than a minute, some butthole has probably ruined your day. Either by stealing your lunch from the company fridge or being a noisy neighbor or not mowing his/her lawn, at some point in your life you might have wondered if everyone else was put on this planet just so they could ruin your day. The answer is yes, yes they were. But Passive Aggressive Notes will teach you how to ineffectively deal with those bastards . . .

Or, if you're annoyed by the passive aggressive note leaver, how to respond with a note of your own . . .

Passive Aggressive Notes is one of the dozens (or hundreds???) of blogs that have been converted to books. I assume this is done for people like my father who have no idea what a computer is or why anyone should need their phone to be "smart." Sometimes these books are big hits, but sometimes (like in this instance) they miss the mark. If you're like me and love having strange little books sitting around for guests to flip through (should I make a passive aggressive note telling guests that books aren't allowed near the toilet????? perhaps . . .) this is a fun addition. However, it is kinda tiny . . .

which makes some of the entries nearly impossible to read . . .

and the selections aren't really of "LOL" quality, so I can't give this one more than a "meh" rating.

I did, however, place my own passive aggressive note up in what I have dubbed "the hallway of constant light." I'll update this review should I indeed have to cut a bitch : )