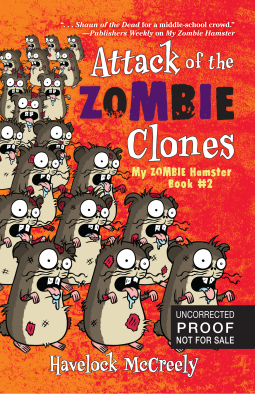 5 Stars
“Anti-Snuffles was back. And this time it was personal. Dun-dun-DUN.”

Although I had not yet read the original, when I saw Attack of the Zombie Clones: My Zombie Hamster 2 up for grabs on NetGalley I immediately requested it. You see, a couple of years ago we had a “I feel bad my hamster is locked in a cage – I should TOTALLY let him roam free tonight” moment at my house. Said hamster did what any smart hamster would do – he bolted as fast as his fat little body could go, never to be seen again . . . We still hear noises in the ventilation system sometimes, though. I’m assuming he’s a zombie so we go to bed each night with an arsenal of weapons:

3. Army helmet. Duh, zombies want to eat B-R-A-I-N-S so you have to protect your own;

5. Photobombing *expletive deleted* kitteh. Can hopefully assist in destroying the zombie hamster, but if things go wrong can be used as bait while you hightail it out of there.

But what if our preparation hasn’t been good enough? What if the zombie hamster has been cloned and we have to save the entire neighborhood? Or even the whole town?!?!?!? This book was obviously required reading. And it was so much fun. Tons of action, comedy, plot twists, it had everything you want to look for in a sequel:

“Figure out what worked in the first, then double, triple, or quadruple that in the second. Make the villain bigger and scarier. Make the danger a milliontimes more dangerous. Dun-dun DUN.”

It even had a potential villain whose voice sounded like this guy . . .

The only thing that really shocked me was that I didn’t end up being the bad guy. After all, I do have an undead menagerie at my beck and call . . .

So, if you’re the parent of a kid who hates to read (like I am) and are always looking for something you can read together (in order to prevent them from fibbing), this is an excellent selection. So entertaining and filled with references to things like Jurassic Park and Alien and Star Wars and Raiders of the Lost Ark and Snakes on a Plane on and on to keep kids and grown-ups both reading. And even though I received the “smelled a fart” glare when I told my tiny human we would be buddy reading, we both ended up having a great time. You guys are aware of the “smelled of a fart” look, right?

Oh, hey, BINGO. That’s something that hasn’t been talked about at all this week. Here’s a novel idea . . . let’s play a little game of “book review BINGO.”

Okay, I have no idea of the author is actually under 30 or not, but I want to win so I’m saying he is. And that, folks?

“The third sequel takes the hero out of his comfort zone and puts him in a completely new environment. Something nobody has seen yet.”

ARC provided by NetGalley in exchange for an honest review. Thank you, NetGalley!
Posted by Kelly (and the Book Boar) at 9:58 AM