We Met In December by Rosie Curtis 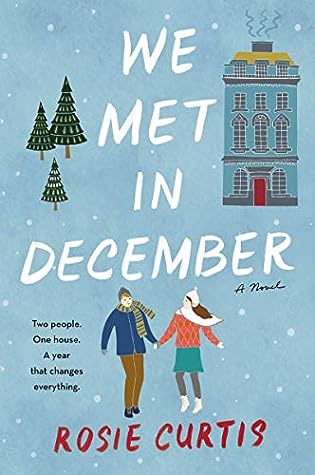 While it may run the course of all twelve calendar months, rest assured that We Met In December is 100% a Christmas romance following the budding friendship-that-you-just-know-will-end-up-being-more between Jess and Alex who find themselves roommates with three others in a giant old Notting Hill house. A bit of a spark can be felt between the two upon moving in, but house rules say no fraternization so Jess attempts to brush her attraction to Alex under the rug and goes on her Christmas holiday. Upon her return she catches one of the other roommates sneaking out of Alex’s bedroom and figures things truly weren’t meant to be. BUT OF COURSE THEY’RE MEANT TO BE because it’s a romance and this one does it in such a pleasant, slow rolling type of way with not a lot of drama and I just loved it.

We Met In December made me feel all warm and fuzzy like a mug of hot cocoa on a snowy day while wrapped in a Sherpa blanket and wearing my comfiest PJs. I sucked this right down while wishing someone would option it and make it a movie by next year so I could watch it on repeat for the entire holiday season until my family threaten me with bodily harm.
Posted by Kelly (and the Book Boar) at 8:15 AM