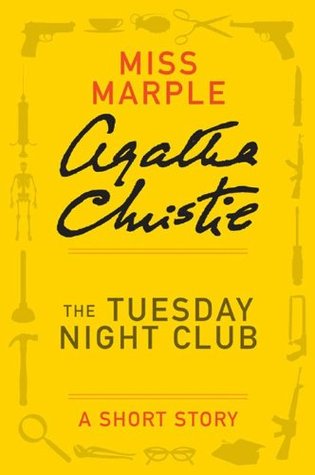 The Tuesday Night Club is a super shorty-short by Agatha Christie about a group of six folks (Miss Marple included – in her debut before she became the focus of her own book series) who decide to create a club that will meet weekly in order to discuss unsolved mysteries. The first case covered being . . . .

After a supper of canned lobster and a dessert of canned trifle, three people become ill and Mrs Jones is found dead.

You’re probably thinking what I was thinking – no mystery to be solved here, pretty simple answer . . . .

But you would be wrong.

Confession time: I picked this up because I am addicted to the stupid-as-hell-so-please-don’t-judge-me Aurora Teagarden movies that can be found on the Hallmark Murders & Mysteries channel (I’ve read a goodly chunk of the book versions as well). At some point I noticed the credits naming this little story as the inspiration behind Charlaine Harris’ series so I had to check it out. Obviously at less than 30 pages this wasn’t any sort of life changer, but it was a fun way to spend 15 minutes and discover where one of my favorite guilty pleasures sprouted from.
Posted by Kelly (and the Book Boar) at 9:31 AM