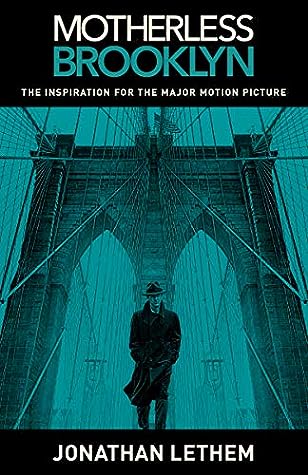 Motherless Brooklyn is told from Lionel Essrog’s perspective. An orphan residing in the St. Vincent’s Home for Boys in Brooklyn, Essrog and a handful of others ranging from 13-15 are picked up by local hood Frank Minna as day workers for his local “delivery company.” Fast-forward 15 years and those same boys are assistants for Minna’s “detective agency” . . . . . and Minna is dead. What follows is Lionel’s attempt to discover the whodunit.

I have absolutely zero recollection of how this got added to my TBR. All I know is the library had one copy so I have been waiting on it for months and months. During that time I discovered it had been adapted into a feature film with an all-star cast. I can’t imagine anyone better than Edward Norton being the one to declare this novel a labor of love and not rest until Essrog was brought to life on the big screen. He’s a narrator like you’re never seen and deserves to be portrayed by an actor with Norton’s capabilities. Why, you ask? Since I didn’t mention it before, it’s due to the fact that Lionel Essrog suffers from a severe case of Tourette’s syndrome. And that’s the whole reason this book works. The “mystery” is one of not only the meh variety, but also one that is all but solved and explained to the reader by pretty much the 60% mark – and there’s a completely unnecessary romantic interest thrown in to muddy up the waters. Heck, the entire thing gets a little bit lost in itself. Although a specific timeframe is never provided, readers must assume the story takes place roughly in the 90s (some people have cell phones that fit in their pockets, but also still beepers and landlines and drive cars like Mercury Tracers). However, the actions/exchanges of the characters along with the noir style of delivery tricks the brain into believing it to be taking place decades ago. (Apparently the film has fixed this glitch and has the story taking place in the ‘50s.) Lionel compares some of his tics to the acting style of Art Carney and he and the other Minna Men are told they look like rejects from Welcome Back Kotter – it’s just odd. But Lionel Essrog himself? He’s perfection.

He’s the quintessential loveable loser. Not only due to having a very in-your-face medical condition during a time when people weren’t familiar with it and instead simply assumed him to be “the Freakshow,” but also due to his naiveté and loyalty to a boss he truly believed to be a legitimate businessman. With the recent backlash regarding authors who choose to write tales that are not their personal story to tell, I’m certainly glad Lethem is an author who was not censored simply for the fact that he himself does not have Tourette’s.