If You Want To Make God Laugh by Bianca Marais 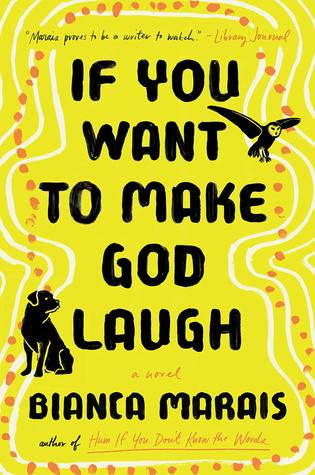 2. One nun excommunicated from the Catholic Church decades ago (after being secretly raped and impregnated by the parish priest) whose baby was taken and raised by the sisters in the convent;

3. One currently pregnant girl (who also was a victim of rape);

4. One former maid and mother of pregnant girl who is currently dying;

5. One set of good intentions of dying woman delivering currently pregnant girl’s baby to wealthy white sisters named in numbers 1 and 2 above;

6. One (now formerly) pregnant girl who gets herself hired as current maid for sisters 1 and 2 in order to be near son;

8. One setting of post-apartheid South Africa;

And you’ll have what was added to my TBR due to it being soooooooo many people I follow on Instagram’s choice for Book of the Year. When will I learn that I am an old curmudgeon rather than a millennial and I don’t share a lot of these young whippersnappers’ opinions?

Positives? The black/white racial commentary was very well done. Not real heavy-handed and how both sides viewed each other was presented throughout. I also loved Ruth. I won’t forget her soon. Other than that?????

If you know me, you know that tragiporn isn’t generally my idea of a great time unless it’s done extremely well and catches me in the feelings when I’m off guard. This one was like being beaten over the head with a frying pan to get the point across.
Posted by Kelly (and the Book Boar) at 7:30 PM