Life Will Be the Death of Me by Chelsea Handler 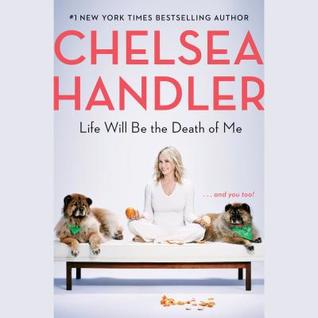 Confession: Chelsea Handler has a voice I want to punch in the face so I’ve never been able to watch her on television. Despite this auditory issue, I have somehow managed to become quite the fan when it comes to her books. (I always tried to hear her doppelgänger, Elizabeth Banks, in my head instead when I read them.) Lord knows why I decided to give this one a listen, but it probably didn't help my rating any *shrug*

I thought this was going to be a hilarious take on a spoiled celebrity reevaluating her life and re-learning how to take care of some of the simple things without paid assistants. What I got instead was a real downer of a story that focused A LOT on death.

This is the second Handler book in a row that has missed the mark for me – maybe she’s out of memoir material?
Posted by Kelly (and the Book Boar) at 7:30 PM