An American Marriage by Tayari Jones

Let’s get real. That’s the reason everyone and their damn dog read this thing. Now that I’ve read it, I’m fairly certain that’s why many users rated it so high as well. I actively avoided it for months because I wasn’t quite sure if I was still a drinker of the Oprah Kool-Aid and wanted to maintain my fond memories of a bygone era. But then a co-worker told me about a podcast she listened to where Tayari Jones was interviewed and convinced me to add my name to the waiting list because she sounded so nice. There’s a good chance that she’s the nicest person in the universe . . . . but the characters she wrote about sure weren’t.

While I don’t believe that is the case, the message that THESE YOUNG PEOPLE in particular didn’t respect the institution of marriage was broadcast loud and clear throughout the duration of this novel. As a woman who has been married for 22 years, let me tell you this story pissed me plum the fuck off. These people weren’t in an “American Marriage” – or if they were I’m declaring I want different categories because they didn’t even LIKE each other FFS. He was an overgrown manchild who screwed women on the side while vilifying his “little missus” for not being interested in getting knocked up on their honeymoon. She was so worried about losing herself to a man that she wouldn’t give any part of herself for the greater good of their union. Their “marriage” of a year and a half was full of lies and omissions and both of them sickened me.

I’m a person who LOVES reading about the underdog or the “bad” guy. I don’t shy away from vile characters – often times I even find myself cheering for them. But these people? Ugh. If this is what “real” people are like then let me stay in my bubble because I could just vomit. From giving up on her supposedly innocent husband nearly instantaneously (don’t argue semantics – just because she pretended to stay with him for two years doesn’t mean she didn’t move on with her life/career immediately), to falling into bed with her childhood friend (and again, this relationship had zero actual love that translated to the page – only convenience and a copout) to him having a one-night-stand with a woman the day he’s out of prison and then informing his wife that he could rape her if he wanted to when she dares to tell him he needs to use protection if they are going to have sex (while she’s supposedly engaged to her (and his – can’t forget they were college buddies) best pal). I could just vomit.

I don’t know this reviewer, but the first few lines of THIS REVIEW asks the questions I kept asking myself. The answer for me? My rating comes from how much I enjoyed a book – not for its literary merit. I LOATHED this book, its characters, the glossing over the trial/incarceration/appeal/etc., its jumping of the shark that somehow a man whose father ran out on his mother when he was but a baby somehow MAGICALLY ends up in not only the same penal institution (and don’t forget there’s roughly 2.3 MILLION PEOPLE currently incarcerated in the United States), but also winds up his cellie in some attempt at tragi-porn that never delivers ANNNNNNND the beyond the grave letter from his dearly departed mama. GTFOOH. It doesn’t matter that the writing was clearly good, the snippets of imprisonment left me wanting more of that story, the final showdown in the front yard FINALLY offered me something to believe in or Big Roy . . . . .

“When I look at Mr. Roy out there, at his wife’s grave, I feel like I’ve been playing at marriage. That I don’t know what it is to be committed.”

Oh Big Roy. You were nearly enough to make me change my mind, but I’m sticking to my guns and this solo star.

Nearly ALL of my friends loved this novel thoroughly. There’s a good chance you will too. After all, the power of Oprah compels you. And if you think I’m kidding about that, here’s a pic I took last night during a “minute to win it” type of event where I pulled all the Oprah books I could off the shelves . . . . . 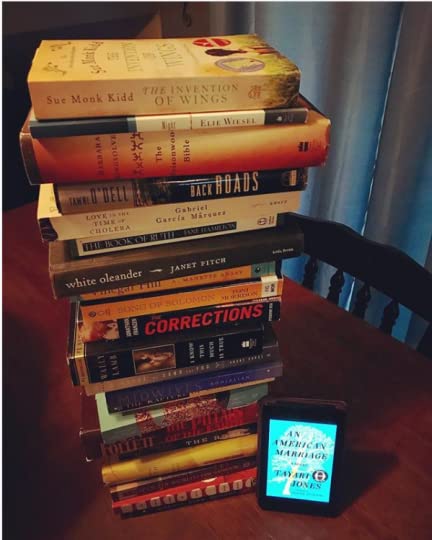