The Preserve by Patrick Lestewka 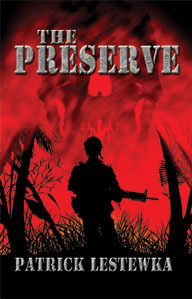 “Anytime. Anywhere. Anyhow. I will die for you.”

In 1967 a group of young men were brought together courtesy of Uncle Sam. They became killing machines and part of an elite task force known as the Magnificent Seven . . .

Five made it out of the jungle and went on with life . . . or whatever semblance of one they could make for themselves. Fast forward 20 years to the five men each receiving a letter along with a check in the amount of $50,000 if they attend a meeting – where a promise of an additional $1,000,000 paycheck is offered if they are willing to team up once again and participate in a rescue mission somewhere in the Northwest Territory known as “The Preserve.”

Where to start? Man this IS NOT a book I can recommend to just anyone. Mitchell told me to stop being such a little bitch and let him do this review, but to be 100% honest once he read the following . . .

“Then the thing turned to face us and its eyes, oh Christ those eyes, and its head bluntly misshapen, snouted, with the features of a boar . . .”

Yeah, he was gonzo and declared an automatic 5 Star rating should be given no matter what the remaining 3/4 of the book brought to the table.

So what did the other 3/4 of this book bring to the table? Well, aside from a repeat performance by my breakfast, lunch and dinner it brought one hell of a trip that I won’t soon forget . . . .

The Preserve might not truly be worthy of all of the Stars for most readers, but it’s getting all of them from me. I will forewarn you, you REALLY have to dig war speak. Luckily for me I was raised in a testosterone-driven family and cut my teeth on movies like Full Metal Jacket, Apocalypse Now and Platoon. The characters, the battles, and the atrocities all brought memories of those films to mind. As I hinted about above, you also need to have an iron stomach. This is by far the goriest book I’ve ever read. Nary a page went by without something unthinkable being described in great detail.

I decided to pick this book up because I am a giant pussy and am terrified to write up how much one of my favorite author’s soon-to-be-released novels failed to wow me. However, “Patrick Lestewka” was able to deliver everything I have come to expect from Nick Cutter. Man I love those crazy kanucks . . .

I picked The Preserve up a year or so ago due to the Cutter angle mentioned above (and also due to the $2.99 Kindle price tag). I decided to read it now both because of the Little Heaven fail and because Charlene’s review called it “fun.” Only Charlene would call this fun. She is my go-to gal for all things horror and the best kind of sicko!
Posted by Kelly (and the Book Boar) at 7:00 PM