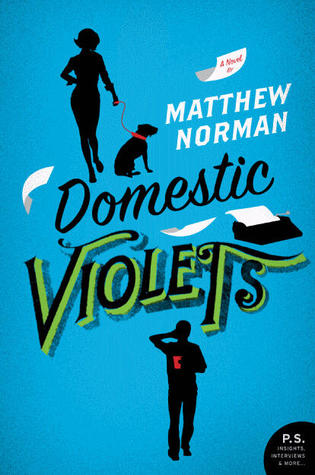 2 Stars
Don’t feel like reading a review? Join the club, because I don’t really feel too keen about writing picturing one up either. Here’s the short version for any of you who have better things to do today . . .

For the three of you who are still here, let’s have a go with what exactly brought the “meh” factor for me when it came to Domestic Violets.

Let’s start with how I even discovered this book in the first place. My friend Melki was reading another Matthew Norman book that I immediately went and tried to get on NetGalley. However, since NetGalley enjoys toying with my emotions, that request is still pending - even though the book in question was published a week ago . . . .

I can confirm that Domestic Violets was, in fact, a “family drama about one man’s improbable trials of love, loss, and ambition; of attraction, impotence, and infidelity; and of mid-life malaise, poorly-planned revenge, and the Pulitzer Prize for Fiction.” Unfortunately, for me it failed to deliver in the “darkly comic” department. And the comparison to Jonathon Tropper and Tom Perrotta? Well, that’s where things just get a little unfair for poor Matthew Norman. Tropper has made an art out of writing the quintessential loveable loser paired with a dysfunctional ensemble cast. Perrotta is a master of writing the aforementioned darkly comic twist. Matthew Norman is no Jack Kennedy (sorry – too much election coverage) Tropper or Perrotta. I didn’t enjoy any of the characters in this story and I really didn’t want them to end up with any sort of happily ever after. It’s bad enough when it seems all the d-bags in the world never get what’s coming to them (*cough Drumpf cough*), karma could at least kick some fictional ass for me. Even the humor in this one was borrowed and not fresh . . .

The good news is that even though this one didn’t work for me, I read another Tropperesque book that was nearly as good as I was hoping it would be (Amp’d for those who are curious since I officially suck at writing timely reviews – I’m going to blame it on growing closer with slackers like Ron 2.0 and internet-challenged Delee) and I’m also still very interested in getting my hands on We’re All Damaged because any fella who gets dumped in an Applebee’s is probably a fella I’d like to get to know better.
Posted by Kelly (and the Book Boar) at 7:00 PM