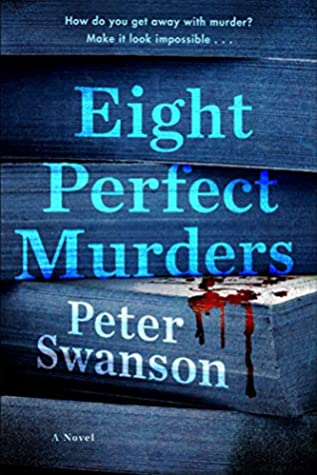 Oh Peter Swanson, you are an old soul and my kindred spirit. Eight Perfect Murders is an homage to time gone by written by an oh-so-obvious booknerd (and boozenerd too with all the shoutouts to different beers/beverages). The premise is that quiet bookstore owner Mal is approached by an FBI agent regarding a series of unsolved murders. Mal isn’t truly considered a suspect, but it is suspect that whoever the killer is seems to be following an old blog post Mal wrote regarding what he believed to be “eight perfect murders” conducted in novels. From . . . .

And more, Mal becomes a bit of an advisor to the Feds while getting increasingly paranoid that he is the killer’s true target.

If you can’t tell from the references above, this is a tried and true murder mystery. It is in no way, shape or form any sort of a thriller. If you want unexpected twists and reveals that knock you off your feet, this is probably not the book for you. But if you looooooooooooooooooooooove old Hitchcock films and authors like Highsmith and Christie, Peterson Swanson might just become your new best friend. He might add to your TBR pile too like he did with me. Coming up soon? The Secret History
Posted by Kelly (and the Book Boar) at 7:00 PM