The History of Jane Doe by Michael Belanger 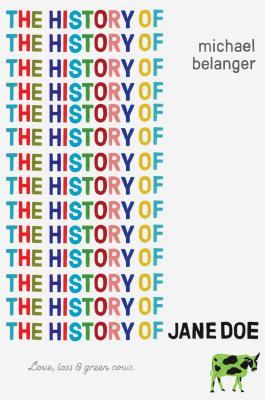 Allow me to apologize in advance for beginning this review with a spoiler, but I think you need to know this is the story of a girl who commits suicide. If that’s a dealbreaker for you, stay far far away because it even made an old grizzly bear like me almost have a feeling.

Again you should stay far far away because Michael Belanger definitely channels his inner John Green here. On the other hand, if you are sad that Green doesn’t crank out a book a week, this most likely will be a suitable doppelgänger until his next release.

“I don’t have cancer and both of my parents are still alive. I just thought I’d get that out of the way so you’re not disappointed. While we’re at it, I might as well tell you that I’m not a vampire, I don’t have magical powers, and the closest I’ve ever come to fighting a war against an evil dystopian government was in a video game. The truth is, I’m writing this mostly to help me understand everything that happened over the past year between my (ex) girlfriend Jane and me.”

Thus begins the history of Ray and a new girl we will know only as Jane Doe who moved to town . . . .

Much like in An Abundance of Katherines, this one featured a best friend I would like to adopt as my own child. Sidenote: And really, what kid WOULDN’T want me to be his mama????

And by the end it has done everything possible to rip your heart out. For like the 47th time this year, this is a book that has me questioning why it has so few ratings and reviews – I mean that dang cover alone should garner a second looksee! I loved it and I think many YA readers would love it too.
Posted by Kelly (and the Book Boar) at 7:00 PM