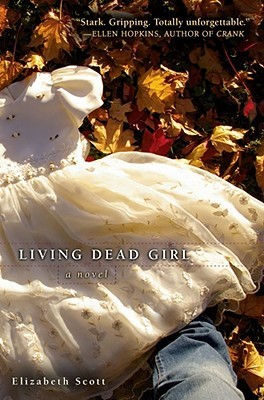 “I decide everything. Remember that.” God and monster all in one, and mine to worship.
First of all . . . .

Well, minus the crying. This was rough, but it takes more than a brutal storyline to get me to squirt some tears (more specifically, my period). Living Dead Girl is about – here I’ll just let the book tell you . . . .

When Alice was 10 years old, her class took a field trip to the local aquarium. Alice got separated from her class after being disappointed in the lack of dolphins and chose to go see the penguins on her own. It was there that she met a gentlemen who informed her that her class was now watching a movie and he would show her to the theater. Five years have passed since that day. Five years since Alice has seen her mother and father. Five years since she last saw her house at 623 Daisy Lane. Five years of living with Ray . . . .

“You can get used to anything. You think you can’t, you want to die, but you don’t. You won’t. You just are.”

I had never even heard of this book until over the weekend and I’ll be damned if I can remember what “if you liked this, you should try THIS” list it popped up on over at the Faceplace, but I am completely blown away I haven’t seen it over and over again on the Banned Books Week suggestions. To whoever decided to market this as a Young Adult selection, I give you mad props because you must have balls the size of watermelons. I can only assume the pitch was something of a “think of this like a modernized after school special.”

Living Dead Girl is definitely a story each parent will have to decide for themselves if they think their child should read (and I encourage parents to read this first before allowing your kid to check it out). While there are not necessarily specific details given regarding the abuse Alice suffers, that does not make the story less graphic and two-and-two is easily put together regarding all of the goings on. As the story progresses there’s a solid chance questions will arise about some of Alice’s behaviors and what she is willing to do in order to no longer be the focus of Ray’s attention. Not to mention that, much like in real life, a tale like this cannot have a happy ending. Assuming my children would actually read on their own voluntarily, I would probably attempt to keep this one off their TBR until high school. Highly recommended to anyone who thinks they can handle it and zero judgment for anyone who knows they can't.
Posted by Kelly (and the Book Boar) at 7:00 PM