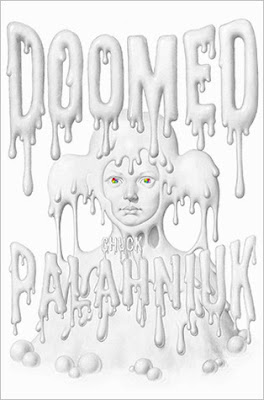 1 Star
Madison Spencer did what all residents of Hell do on Halloween – she returned to Earth for an evening of candy gathering.  Unfortunately, she also missed the midnight curfew and is now stuck in Purgatory (a/k/a Earth) as a ghost.
I realize Chuck Palahniuk is a polarizing figure.  Nothing is off limits when it comes to what he writes.  I’ve always been a fan of his over-the-top stories and have been a pretty zealous defender of his work.  Until now.  While I found Damned to be entertaining and brilliant, sadly Doomed just REALLY sucked.  I realized too little too late that Madison Spencer is a vapid waste and the rest of the ensemble cast is what made Damned so enjoyable.  From wishing I could kill Maddie all over again to end my misery to wishing I had a barf-bag handy for the pointless squick-out factor, this book proved to be an absolutely unnecessary sequel.  And the  most horrifying thing about Doomed????  The final words – “The End?”  NOT A QUESTION MARK!!!!  SAY IT AIN’T SO, CHUCK : (