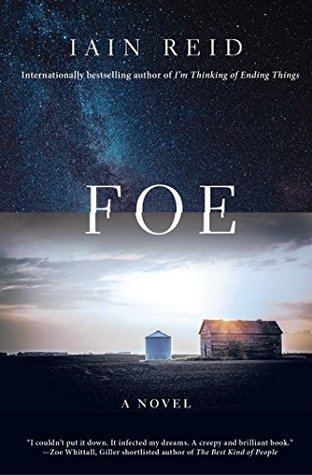 My first experience with Iain Reid kind of resembled my husband being sent to buy tampons . . . .

I didn’t get it. Luckily I post my opinion on the internet, so I was able to see what a complete fucking idiot I am courtesy of some other reviewers. What can I say? I am an idiot. Or I was – because this time around?????

I knew what was going on the entire time it was going on. Annnnnnnnnnd I even knew the extra summin’ summin’ was coming at the end. I still have questions about why though. I’m more than happy to discuss under spoilsies in the comments, but I know y’all is a bunch of lookie-loos who will click the tag if I put it here and the whole thing that makes this work is the “getting there is all the fun” kind of aspect. Be warned that this is NOT horror, however. As another reviewer said, it’s more like an episode of The Twilight Zone.

Junior and Hen have lived in the boonies since they got married. She works at an office – he works at the local grain factory. They are simple folk who lead a simple life . . . until a representative from OuterMore turns down their drive and makes Junior an offer he can’t refuse – to potentially be part of the first resettlement on Mars.

I believe Iain Reid has an education in philosophy and it shows here in a story about mind vs. matter and questions of consciousness. Don’t let that scare you away because his writing style is easy to read. My pea brain also found amusement in the fact that he chose OuterMore to be founded by someone who first became known for creating self-driving automobiles . . . .

Who was described as sort of resembling this blonde fella . . . .

^^^In case you aren’t familiar, my buddy Eric will tell you that’s Julliard Massage – the founder of Ricki Lakes ; )

Foe is a prime example of why I try not to be one-and-done when it comes to authors unless they engage in some serious asshattery. Reid’s first hit was a giant miss for me, but this one gets 4 Stars. Go figure.
Posted by Kelly (and the Book Boar) at 7:00 PM