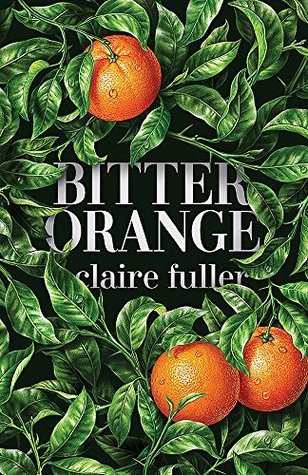 Or at least it seems. I read Bitter Orange nearly a month ago but never posted anything due to the fact that . . . .

Does everybody else struggle with finding something to say about 2 and 3 Star books as much as I do?

To begin with, this was yet another selection I immediately requested from the library simply because it was all over Instagram and had a pretty cover. I actually perused the blurb a tad for a change before reading and saw that it was supposed to be some psychological thriller about a voyeuristic neighbor who finds a peephole that allows her to spy on her downstairs neighbors. Now if you know me you know that made me all like . . . . .

The story here is presented by our narrator Frances. Currently confined to a hospital bed while she slowly deteriorates from some form of wasting disease, Frances recalls one unforgettable summer spent at a dilapidated manor home she shared with another couple – Peter and Cara. They had been hired to document everything within the interior, she had been hired to research its garden architecture. At least one, if not all, would prove to be an unreliable narrator.

Sounds great, right? And really it is . . . just not in the way I was expecting. There weren’t many thrills contained in this thriller, but somehow it didn’t really end up mattering much to me. The writing was absolutely lyrical, causing me to somehow picture a time like this . . . .

Only to have some sort of reminder jolt me back to the reality that I was really supposed to be in a time. . . .

If you’re looking for something atmospheric, this might be a winner for you. If you want to really feel like you’re in on the peepin’ of the neighbors, I might go with Watching You instead.
Posted by Kelly (and the Book Boar) at 7:30 PM