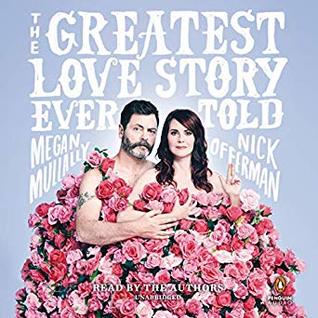 Imma keep this one short and sweet.

First off, if you are allergic to books of noise then you best remove this from your TBR right now because it only works in audio format. The whole charm of listening to a couple who has been together nearly two decades is that they talk over each other and finish each other’s sentences and interject and add color to what the other is discussing.

I will also say if you are like me and #teamronswanson all the way, this might not end up being great for you either. Despite being a woman of a certain age who has been around for Will and Grace to be shoved in my face not once but twice, I have watched maybe two episodes. Maybe. Maybe only one. And I can’t remember anything about it. I appreciate the Karen character and have seen plenty of clips. It’s obvious Megan Mullally is funny, but the only way I know that firsthand is from when she guest starred on Parks and Rec. The Greatest Love Story Ever Told is Mullally heavy and I didn’t find her nearly as charming as she finds herself. The fact that Offerman is so willing to let her drive the train probably is what makes him the perfect husband. However, for an Offerman fan it leaves the narrative a little lacking. I think I’ll give his solo stuff a listen and see if that works better or if I’m simply a superfan of the fictional version and not of the real human himself. I know that’s the case with the couple together so they will forever remain Ron and Tammy . . . .