Being Henry David by Carl Armistead 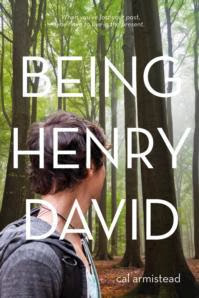 A 17-year old boy wakes up at Penn Station with no memory. All he knows is he has $10 in his pocket, along with a copy of Thoreau’s <i>Walden</i>. Rather than confessing his bizarre story, he chooses to introduce himself as Henry David when he meets a kid named Jack who seems to know his way around the train station. Venturing out to the mean streets, he is nicknamed "Hank" by Jack and his sister, Nessa. The three soon run into trouble and "Hank" decides to leave the city and go to Walden Pond. He can think of no reason for him to be carrying the book unless that was his initial destination and the way to find an answer that will cure his amnesia.

The idea behind this novel is a good one. Something horrible has happened and "Hank" is suffering from amnesia. The journey to Walden Pond is good, the piecing back together of his memories is interesting. Unfortunately, it’s just reeeaaaaaaally far-fetched in that "Hank’s" memories return, but luckily he has been taken in by an ultra cool hipster who is more than willing to let him continue to hang for a few days before figuring out how to get him back to his real life. Really, brother? That would be called kidnapping. There’s also a girl storyline (of course there’s a girl, right?) which is fine, but then we add in a random talent show and it all gets a bit convoluted. You can definitely do worse when it comes to YA novels, but you can do a lot better too.

Oh, and if you’re wondering the answer to "What Would Henry David Do?" – apparently he would sing "Blackbird" at a talent show rather than deal with reality.

"Blackbird singing in the dead of night
Take these broken wings and learn to fly
All your life
You were only waiting for this moment to arise.

Blackbird singing in the dead of night
Take these sunken eyes and learn to see
All your life
You were only waiting for this moment to be free.

Blackbird fly Blackbird fly
Into the light of the dark black night."
Posted by Kelly (and the Book Boar) at 1:42 PM