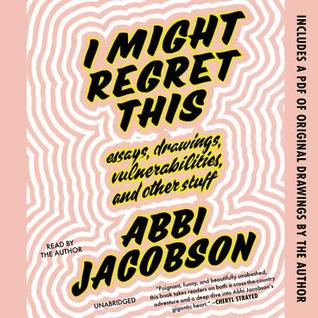 Despite not being hip enough to have ever watched any “webisode” of anything . . . ever, as a middle-aged woman I most certainly responded to the siren song of “from Executive Producer Amy Poehler,” became a Broad City instafan and discovered . . . . .

There was zero chance I wasn’t going to pick up Abbi Jacobson’s collection. And when I heard it was about her going on a solo cross-country road trip?

Unfortunately, I also expected this to be FUNNY since, you know, Jacobson is a COMEDY WRITER for a living. I didn’t expect free association/stream of consciousness and I was unaware that the whole idea of the trip was inspired due to a breakup. It’s disappointing to report that I may really only be in love with one member of this duo . . . .

I also realize you are not supposed to discount or dismiss someone else’s heartbreak, but because I am a horrible old lady who has been married 147 dog years I will freely admit that it was my knee-jerk reaction to do so and I was more than a bit bummed that this didn’t live up to my expectations. I will say, however, if you frequently find this happening in your life . . . .

The “Sleep Study” chapters may be worth the price of admission.

Bonus: Jacobson might have the most pleasant speaking voice/delivery I’ve ever subjected myself to whilst commuting (and yes, I realize the print version contains “illustrations” of some sort, but really – skip it, audio is the way to go on this one).
Posted by Kelly (and the Book Boar) at 9:02 AM