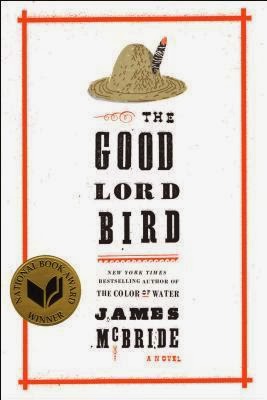 3 Stars
A young slave named Henry Shackleford gets caught up with abolitionist John Brown and the fight for freedom when Brown kills Henry’s father. A misunderstanding in the heat of the moment also has Brown believing Henry to be a Henrietta - a mistaken identity Henry continues to assume as he tries to stay alive.

Ack. This is a hard review to write. Mainly because I didn’t feel anything while I was reading this story. It generally takes me about a day or day and a half to get through a novel of this size. The Good Lord Bird took me three weeks. The first 100 pages were good and I was really thinking I was going to breeze right through and lovelovelove it, but then the story just became a loop of the same scenes complete with the same dialogue and I wanted to put it down. And put it down was exactly what I did. In the three week span of reading this book, I also read 12 others. By the time I reached the climax and the raid on Harper’s Ferry, I was more than ready to be finished.

I will say that Mr. McBride has a wonderful sense of humor and, as this won a National Book Award, he can obviously write. Sadly, he just didn’t write a story that resonated with me.