The Beginning of Everything by Robyn Schneider 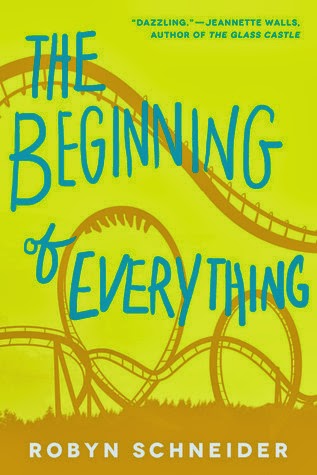 4 Stars
Ezra Faulkner had everything going for him – prom king, tennis star, hot girlfriend, etc., etc. A tragic accident leaves Ezra broken – both physically and mentally. Without his status as a top athlete, how will he fit in with his old friends Senior year? Does he even want to? When new girl Cassidy enrolls at his high school and an old elementary school pal pops back into his life, Ezra begins to realize maybe he wasn’t the person he has pretended to be all these years.

In what I thought was going to end up as yet another failed attempt at finding a book that would make me get all feely-feely, I realized my problem might be worse than I thought. I had been thinking I might be a robot, but then I wondered “what if the problem is even worse than that?”???

The first 10% of The Beginning Everything had me ready to throw in the towel. All I could think when I started this book was “good God Ezra is vapid”.

I slapped out of it. I got over the idea that I was going to find this novel “heartwrenching” like the blurb told me and just tried to accept it for what it was: a perfectly sweet tale of first love and first loss that make up the high school experience. And guess what? I more than liked it. (Ezra’s lack of self-awareness still grated, but he made up for it with Harry Potter references.) The saving grace that made me turn my frown upside down was how much I fell in love with all of the characters. So, instead of ranting with a 1 or 2 star rating, this one is getting a 4, because at the end of the day (although I didn’t cry) it made me have some good feels. Much like a John Hughes’ movie : )