The Children Act by Ian McEwan 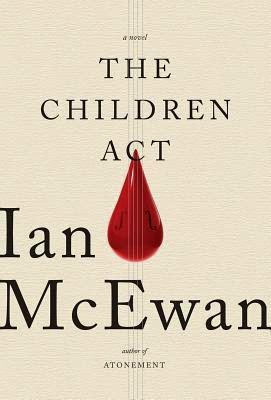 2 Stars
Fiona is a successful, middle-aged, Family Court judge who finds herself being confronted by her husband about his desire to have an affair. In the midst of her marital turmoil, she must also preside over one of the most important cases in her career – that of a 17-year old Jehovah’s Witness who wishes to take his chances of surviving leukemia without receiving a life-saving blood transfusion due to his religious beliefs. Can she save both her marriage and this young boy’s life? Is it her duty to attempt to save either?

I had been very hesitant about delving into another work by Ian McEwan after reading (and re-reading and re-reading) Atonement - a book that remains one of my favorites to this day. Although many have called it overrated and pretentious and have complained about the excessive detail with respect to places and objects and the lack of detail with respect to the characters, to me Atonement remains a nearly perfect, albeit tragic, love story.

When I saw an ARC of The Children Act was available (and when, to my surprise, I was approved), I figured it was time to get over my fear and give McEwan another go. After all, if he wrote something on my favorites list I would probably at least like his other stuff, right? Wrong. Now I know what all of the Atonement bashers were talking about. The Children Act is pretentious and filled with undeveloped characters and drones on and on (and on and on and on) about every minute detail seen when walking down a street, but nearly zero detail when it comes to the characters.

I’m sure there are many who will read this and talk about the beauty of the portrait that is painted by McEwan’s words. Those people are free to consider me stupid, because it just left me cold. And not cold in a good way, like exploring the coldness of Fiona and Jack’s marriage or the coldness it must take for one to sit the bench in Family Court or the coldness one must have in order to let a loved one die in the name of religious belief. There was so much potential in this novel, but sadly it all got lost in the details (of things like rocks or a piece of music or some other nonsense that I could really give two s*^#s about). I’ll always love McEwan for writing one of my favorites, but after this disappointing experience I don’t believe I’ll attempt any of his other books.

ARC provided by NetGally in exchange for an honest review