What Happens in Paradise by Elin Hilderbrand 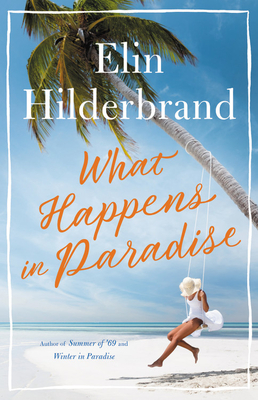 When we last met up with the Steele family they had all returned to the United States to recuperate from the shock of dealing with (a) a dead husband/father, (b) a McMansion in St. John no one knew about, (c) a love child (samesies with the no one knew about her part), and (d) various potential romances. In book two it’s pretty much a given there’s going to be a bunch of other crap pop up that wasn’t disclosed in #1. It’s also a given that these folks are headed back to island life ASAP or else there wouldn’t even be the need for a continuation of the story.

If you are familiar with me you know I spend about 95% of my time on Goodreads talking about how I don’t read past the first book in a series. And yet here I am finished with #2 here and anxiously awaiting #3. What can I say?????

In my defense I will say I probably would have never picked up Winter In Paradise if I knew it was going to be a series (and a cliffhangery type of one to boot – GRRRR). But what’s done is done and when I saw this release on the new and notable shelf on a day where it was 30 degrees rather than the near 70 degrees it was supposed to be I said . . . . .

Don’t even come at me when I decorate for Christmas this weekend. If it can fucking ice storm before Halloween I can Clark Griswald the crap out of the interior of my own house before Thanksgiving.

Anyway, I’m new to the Elin Hilderbrand Kool-Aid drinkers club, but I assume this is pretty much her typical fare (only set on a different island than her older stuff). This is also pretty typical book two content. These are always what I call the “filler” books. You need additional info to move the story along, but there’s not a whole lot of real action until book three. It also would not work at all as a standalone, but it was a great way to escape reality and didn’t require a lot of thinking on my part which is always a plus. Bring on #3.
Posted by Kelly (and the Book Boar) at 7:30 PM