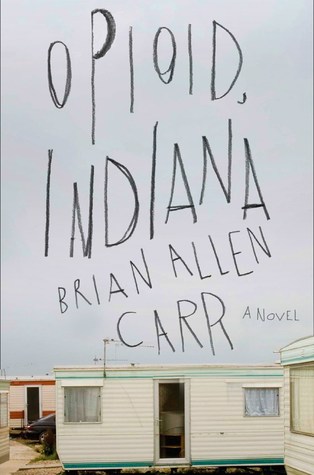 Riggle had to move in with his uncle at the local trailer park after losing his over-the-road trucker dad in an automobile accident followed by his mom succumbing to her grief and committing suicide. This is the story of a week in Riggle’s life when he not only receives a 5-day suspension from school for supposedly having a vape pen full of THC, but also the week when his uncle goes missing.

Unlike yesterday’s review, this is a book that is being marketed as it should be – Young Adult. Again, kids aren’t stupid. Hell, they probably know more about dealing with real-life issues than many adults who either live in a comfort bubble or who have grown complacent. There’s no reason to hide them from the darker side of life and with a title like this you flat out know . . . .

However, since it is YA it does retain a little bit of hope – unlike most grit lit selections I pick up.

I’ve never read this author before (but I did buy a copy of Motherfucking Sharks because - DUH). As the placeholder “review” below indicates, whenever there’s a trailer park on a cover or even a hint that some bad shit might go down due to drug dealing or usage, I’m pretty much like . . . .

This was everything I hoped it would be.

Many thanks to NetGalley for one of the quickest approvals I’ve ever received. It’s like you’re starting to understand me ; )

The cover is a god-danged trailer park and it straight up has "Opioid" in the title . . . .

Seriously. This is pretty much guaranteed to be 5 Stars from Mitchell. Also, it's by the guy who wrote Motherfucking Sharks so if things go well I might have to invite him over to the dungeon my spare room while he writes his next book.
Posted by Kelly (and the Book Boar) at 9:37 AM