The Cactus by Sarah Haywood 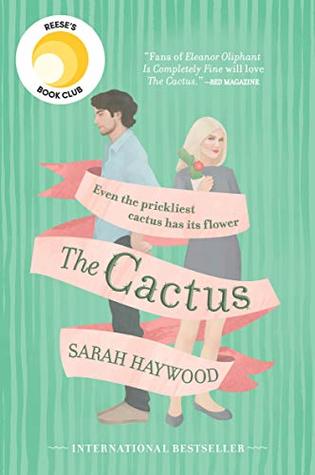 After seeing a couple of low-ratings from my Goodreads’ friends I opted to put The Cactus on the backburner and made my request to the library when I was waaaaaaaaaaaaaaay down the wait list – despite the fact that . . . . .

God am I a sucker for famous people telling me what to read.

I think the main issue people have with this book (and soooooooo many others that are using #ifyoulikedeleanoroliphant as their main selling feature), is that the reason books like Eleanor Oliphant fly off the shelves and receive such an enormous response from the book community is they stand out because THEY ARE DIFFERENT. It’s great to be the first - just ask Gillian Flynn and her Gone Girl. The timing of this release after eleventy thousand other Eleanors had already come out probably didn’t help. And while there are similarities – mainly in the form of . . . .

The two characters aren’t really all that much alike. While “the spectrum” can be pinpointed in a lot of Eleanor-compared stories, in this case Susan’s personality was much more easily blamed on nurture rather than nature. The main point of the story is regarding Susan’s plan to fight for her half of the inheritance her mother (per the aforementioned issues) left to her brother upon her death. Because of her upbringing, Susan doesn’t have much time for interpersonal relationships, her sense of humor is dry and she has a pretty matter-of-fact way of looking at things. Basically . . . . .

Exceeeeeeeeeeeeeeeeeeeeeeept for the whoopsie baby she just so happens to find herself pregnant with. Good lord, if I found out at 45 I was going to have an accidental baby????

That right there is the stuff of nightmares.

Bottom line, if you don’t like Susan’s voice, you won’t like this book. I kind of loved her. And of course all the good feely feels end up coming out and the ending is just great and I am a big ol’ sap deep down despite having a grizzly bear exterior so 4 Stars it is.

P.S. Am I the only one who sees Tori Spelling every time I look at the thumbnail of this cover????
Posted by Kelly (and the Book Boar) at 7:00 PM