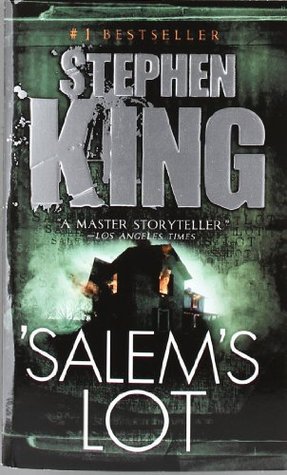 Two Stars for the King. In October, no less. For a vampire book. I anxiously await comments such as these . . . . .

The story here is about a man named Ben who lived in a place called Jerusalem’s Lot (located about 20 miles north of Portland) back when he was just a kid. An experience with a place known to the locals as the Marsten House has always stuck with Ben and now as an adult (and as an author), he returns thinking there might be a story there. What he could never expect is his return to the Lot coinciding with another new arrival in town which would eventually result in nearly the entire population becoming . . . . .

Sounds great, right? Yeah, well when I was a teenager I thought it was. I think I’ve officially learned my lesson as far as re-reading Uncle Stevie goes. I’m not so sure I would be a fan of a lot of these books now that I’m an adult. This one definitely missed the mark. I knew things weren’t going great almost immediately since the first 150 pages were dedicated to introducing a billion one-dimensional characters simply for the point of being able to recognize the future victims . . . . TWO HUNDRED PAGES LATER. (My recollection is I enjoyed this set-up in Needful Things, but I’ll be damned if I voluntarily wrongread that one again just to make sure!) And even when it looked like he might be picking up the pace . . . .

All the action was either fade-to-black or completely done off-page. Talk about a snoozefest. Boring vampires. That just shouldn’t happen.

This also didn’t stand the test of time well. It was soooooooooooooooooooo campy. And not in an intentional way like . . . . .

Like, at one point this was (even to me) considered to be primo writing. But now?????

“Here on the grass,” she said.

She was looking up at him, her eyes wide in the dark. She said, “Make it be good.”

I was going to go ahead and give this 3 Stars, but I read the version that contains all the stuff that found its way to the cutting room floor rather than the book and that is where all the effing interesting stuff was apparently left so I’m giving this 2. Bottom line . . . .

Save your trolling. I’ll most likely just tell you to go F*&^ your own mother and then block your dumbass so you can’t come at me twice. For anyone else who may be skeered to post your honest opinions, here’s my advice to you . . . .