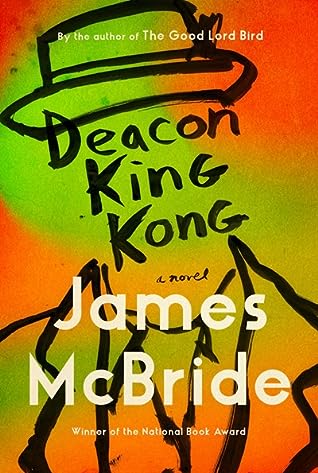 My hold for this latest release by James McBride just so happened to coincide with the group read being conducted by . . . . .

Guaranteeing a nearly perfect rating from the masses and broadcasting my wrongreader status far and wide. The premise here starts off fairly simple . . . .

“A cloudy September afternoon in 1969. That’s the day the old deacon, known as Sportcoat to his friends, marched out to the plaza of the Causeway Housing Projects in South Brooklyn, stuck an ancient .38 Colt in the face of a nineteen-year-old drug dealer named Deems Clemens, and pulled the trigger.

What follows is a story about the neighborhood surrounding the Five Points Baptist Church and the various characters who reside near there. Church ladies, maintenance men with a government cheese side hustle, bumbling hitmen, a mobster known as the Elephant, and on and on. Serious messages are delivered with humor (sometimes to the point of being the annoying slapstick variety) as you meander through the interconnected tales of a possible missing treasure and missing Christmas club cash.

This was my second go around with McBride and at this point I feel comfortable saying my lack of stars comes from a place of enjoying the tale but not the telling. I just don’t connect with his writing. This had a lot of potential, and maybe it fell victim to the hype train for me.
Posted by Kelly (and the Book Boar) at 7:00 PM