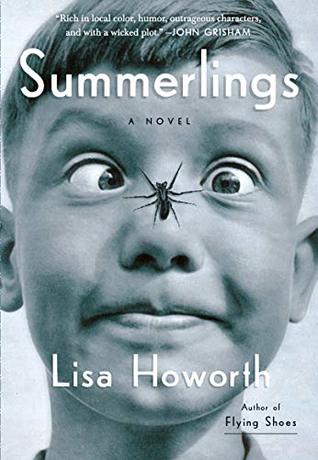 I wanted to read Summerlings for the cover as soon as I saw it via my local indie book store’s weekly email. Period. I did sneak a peek at what I was getting into before my turn came around at the library and thought a story about a group of kids that takes place in Cold War era D.C. during the dog days of summer would probably be right up my alley. I started reading and could hear Richard Dreyfus’ voice in my head narrating to me a la Stand by Me. Unfortunately, it lost me almost immediately.

The premise revolves around the kids attempting to plan a block party for their “Whitman’s Sampler” type of neighborhood in order to bring everyone together (and hopefully earn them an invite to the De Haans’ pool). They also hope they’ll finally get revenge on the local bully. Oh, and there’s a spider infestation happening. The kids are supposed to be between 8 and 10 years old - and sometimes it seems they are, like when it comes to their snappy comebacks . . . . .

Not to mention the glaring reality that despite there being a lot of various plotlines going on per the description above, there just wasn’t much to this story. And the dialogue??? At times the only way I could describe it would be . . . . .

So mad props to whoever designed this cover. It’s sure to sell some copies. As for the content? Aside from the very very very end of the story, I would probably market it as Young Adult and roll the dice that kids might want to read about life in the late ‘50s.

If you do read/do like this one or are looking for a trip on the wayback machine via a young narrator, I highly recommend picking up some Gary D. Schmidt. He’s pretty remarkable.
Posted by Kelly (and the Book Boar) at 7:30 PM