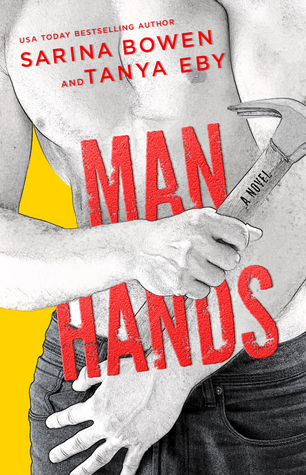 Sarina Bowen had been on my radar for quite some time due to errrrrrybody reading Him awhile back. Unfortunately, the pornbrary has not yet obtained a copy of that one, to which I say . . . . .

I took a few days off last week and vowed that I would read a bunch of smutty deliciousness while at home. I ended up reading this during the Madness of March while my husband watched alllllllll of the hoopies and was quite surprised that he even noticed me being in the room with him since he was not only enraptured by the various games but also because apparently JESUS is in attendance this year (#goramblers). However, notice he did and he even asked what something called “Man Hands” was about to which I responded . . . .

The story here is about Brynn. Recently divorced after catching her husband bestie riding that pony, Brynn is ready to wallow in a bit of misery. However, her friends aren’t having it and force encourage her to attend a party and find some hot rebound sex. Brynn thinks that sounds simply turrrrrible . . . until ex-hubs and ex-bestie show up at the same party. It’s at that moment Brynn goes flying across the room into the arms of the hot . . . gardner (????) Tom and plants a serious liplock on him. And then?????

Well, that is until Brynn discovers not only is her one-nigh-stand . . . or rather one-moment-in-the-boathouse . . . . famous, but also that she has just reached celebrity status as well in sort of a Kim Kardashian fashion . . . .

1. This was the third “fake engagement” story I had read in a row. Tired trope is getting tired for me.

2. Brynn apparently only wore wrap dresses as there were EIGHTEEN different references to her wearing one. I appreciate having “bigger” female leads in romances sometimes, but having the “fat” girl wearing nothing but a wrap dress was even more tired than the fake romance . . . .

I guess I should be thankful she wasn’t in all empire waists . . . or burkas.