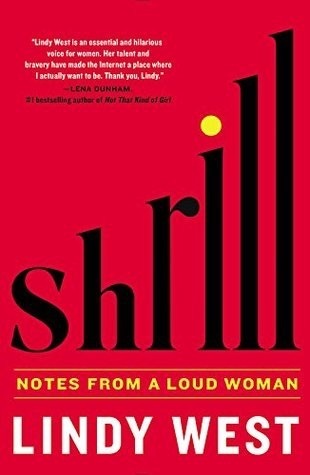 I’m going to be 100% transparent here and admit to the fact that I had never heard of Lindy West or her writing or this book. What I had heard of, however, was . . . .

I have such a wicked crush on Aidy Bryant it’s not even funny. From being one of the driving forces behind the female counterpoint to The Lonely Island . . . .

To owning everything there is when it comes to playing oversexed teens . . . . .

Aidy Bryant is a continual over-the-top laugh-out-loud force every week on SNL and has become a quiet force in proving both the “women aren’t funny” and “fat people are disgusting” troll armies wrong . . . .

When I heard she was getting her own television show I was thrilled – followed by nearly immediately being crushed because I am not a subscriber to the Hulu. So I did what I do best and I looked to see if Shrill had started off as a book.

I started listening and thought this was going to be a little memoir on navigating the world as a fat female. Being that I myself am a fat female, I have definitely spent my adult life embracing my plus size and trying to present a confident/body positive image no matter what trolls might have to say otherwise about the subject. I was pretty sure I would like this book. And I did . . . . until I didn’t any more. Body positivity = good. Believing overweight people should be declared a protected class????

Again – this is coming from someone who is probably around the same size as Lindy West, but I’m not about to let my white privilege show through so much that I’m going to back her up on that argument.

Wishing comedians didn’t joke about things like rape = good. Spending 1/3 of a book arguing that you believe in free speech while kinda doing whatever was possible to take away other’s (albeit disgusting uggos) free speech = notsogood. And speaking of that part of the book. On what planet does Daniel Tosh deserve more attention than he already has received? At some point I think that turd would have dried up and blown away by now if it weren’t for all the attention he receives in response to his “bad boy” brand of humor. Oh and dare I forget the focus on the boypig Tosh (or even better the sour grapes presented to the non-offensive Patton Oswalt simply for being famous enough that people listen to him when he speaks) while Louis C.K. gets a pass . . . . .

I ended up not being the target audience for this “fat, feminist, abortion story” – obviously YMMV. If I didn’t have such a hair trigger when it comes to wanting instant gratification I would have taken a second to look at the blurb and see that West is Lena Dunham’s kind of girl which means she probably wouldn’t be the kind of girl for me. Guess that ol’ hindsight works for me here too ; )
Posted by Kelly (and the Book Boar) at 7:30 PM