Hamilton the Revolution by Lin-Manuel Mirada and Jeremy McCarter 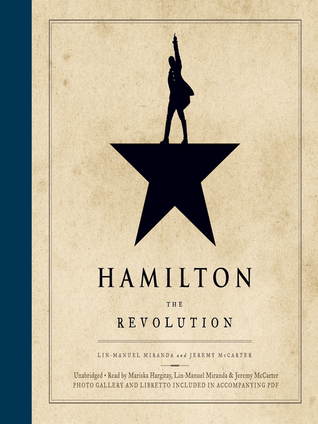 I have officially been revolutionalized and lemme tell you this Kool Aid is DELICIOUS! To be honest, since I have a theater/choir kid in my house I have been living The Hamilton Experience for quite some time now – I just never felt the need to become fully indoctrinated until I knew the traveling show would be coming to town. Unfortunately, I wasn’t aware that when the show finally was approaching the ticket prices would be so astronomical that my poor ass would still not be able to attend. So we’ve been settling for the best we can get. Playing the soundtrack on a never-ending loop and driving the non-theater lovers in the family crazy. Win win!

For those of you who live in caves, Hamilton: The Revolution is the story behind the musical. Specifically, how it went from a crazy idea for a concept album to a once-in-a-generation smash hit. It takes you inside not on Lin-Manuel’s head, but also Thomas Kail and Alex Lacamoire who completed the trifecta which brought Hamilton to life. As nearly everyone who has ever bothered listening to all FORTY-SIX songs in this nearly 100% sung production says . . . .

I opted for the audio on this one in an attempt to turn my frown upside down on my daily commute. I went in blind thinking Lin-Manuel himself would be doing all of the reading, but sadly he only did the footnotes (which, trust me, were well worth the price of admission). Mariska Hargitay wound up being the voice and while I realize she’s become some sort of pop culture icon I have to say . . . .

I still have no idea what television show she’s famous for or why she’s become such a go-to when it comes to “it girl” types of jokes by the cool kids crowd. All I do know is she read slow as shit and I had to speed her ass up to double time in order to not want to murder everyone around me. The content was still killer, though.

And let’s talk about content. Are you a Hamiltonian? What’s your fave? While Quiet Uptown makes water leak out my face errrrrrry dang time I hear it, I can’t ever get enough of King George . . . . .

An antilove song with a kicky beat? Oh yes please.
Posted by Kelly (and the Book Boar) at 7:00 PM