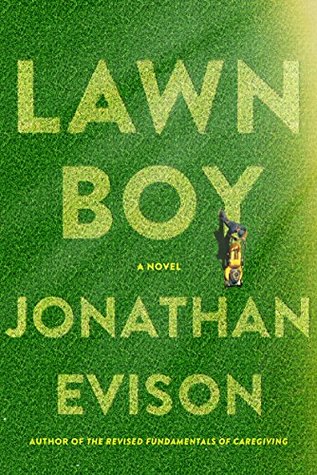 I saw something somewhere comparing Evison’s latest main character to Holden Caulfield, so I probably should have known immediately that would equate me hating it. In my defense, I held off reading it for eternity due to this fear and despite I remain 100% smitten with all things that are The Revised Fundamentals of Caregiving. But then I was just hankering for something of the Evison, Tropper, Nicholls variety (you know, a cluck cluck type of story only written by someone with a penis) and when I logged on to the library site to see what they might offer up I realized I still had an unread ARC of this one on the ol’ Kindle.

I’m not going to waste much time bashing or belittling this one. I’m simply going to recognize that I was most certainly NOT the intended audience for this one. If you are a brochacho who finds yourself constantly missing the point regarding things like how to become a grown-up or treat other humans like – you know – HUMANS, Lawn Boy might be just what you need to be beaten over the head with so you can realize that “fag” and “retard” probably aren’t super cool words that will soon be making a return to the everyday vernacular of the majority of the population and that just because you think you have it bad, doesn’t mean someone else doesn’t have it worse.

As for me? One-dimensional characters and a story that ties up with a pretty red bow – or in this case a pretty green topiary – was a far cry from the Evison I fell in love with.

ARC provided by NetGalley in exchange for an honest review.
Thank you, NetGalley!
Posted by Kelly (and the Book Boar) at 3:09 PM