Losing It by Emma Rathbone 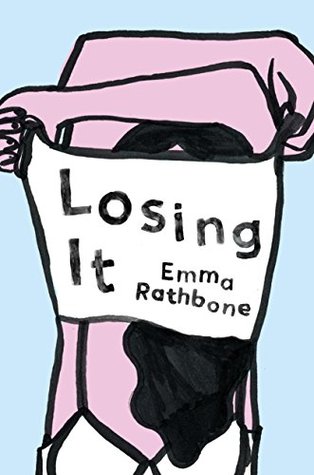 Okay, maybe not. But she is 26 years old and has never done the deed. When she was a teenager, it was because she had certain ideals and expectations . . . .

By the time she got to college, her attitude was a little different . . . .

But now that she’s on the downhill slide toward 30 with V-card still firmly in place????

Nearly EVERY dude she comes into contact with is a possible contender. The only problem????

Julia kinda has a hard time sealing the deal and not talking herself out of it when opportunities arise. Spending the summer with her spinster aunt in Durham, Julia has a whole new approach to things . . . .

“Scrolling through the stock pictures on the tourism part of the website, I saw one of a man and woman laughing at a candlelit dinner. Another showed a couple wearing bright T-shirts and lounging in each other’s arms and staring at a hot-air balloon in the sky. I thought, This is where I’m going to lose my virginity. It would be like going to another country; I would be completely anonymous.”

And now Imma let the blurb do some of the talking . . .

“For readers of Rainbow Rowell …”

Wait, what? Okay, not really. I think they’re trying to hook lovers of Attachments, but since that is Rowell’s lesser-known story this would probably backfire horribly and wind up horrifying a bunch of Eleanor & Park fans instead.

Okay, that’s more like it. Just be forewarned that it’s less of the sheer brilliance that made up Where’d You Go, Bernadette and more of the Today Will Be Different or This One Is Mine vibe/humor.

It truly is “filled with offbeat characters and subtle, wry humor, Losing It is about the primal fear that you just. might. never. meet. anyone. It's about desiring something with the kind of obsessive fervor that almost guarantees you won't get it. It's about the blurry lines between sex and love, and trying to figure out which one you're going for. And it's about the decisions—and non-decisions—we make that can end up shaping a life.”

With the focus on a pretty stereotypical millennial who MANY will find extremely hard to like. I appreciated her irreverent wit, however, so maybe you will too????

P.S. If anyone would like to hire me for an “if you liked this, then you might LOVE this” kind of job, I’m super available and obviously I will name-drop a shit-ton of books in one place : )
Posted by Kelly (and the Book Boar) at 12:01 PM