I Call Upon Thee by Ania Ahlborn 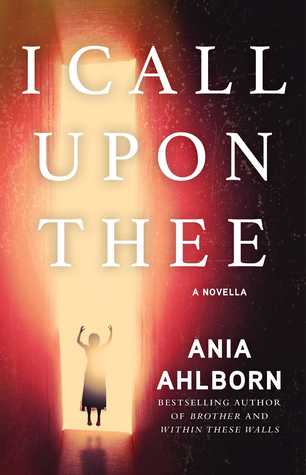 I have commented numerous times over the years that I have a hard time with the “horror” classification because I don’t find many things horrifying. Books seem to fall into other genres for me - thrillers or mysteries or, in the case of the previous Ania Ahlborn I read, super-barf-baggy-cannibalistic-hillbilly (that should totally be a bookshelf at Barnes & Noble because I have read a bunch of those stories). Even the Master of Horror himself, Uncle Stevie, has only terrified me a handful of times. When I started I Call Upon Thee I feared it would be the same as a story of a creepy old doll left in a cemetery was introduced fairly quickly leaving me looking a little something like . . . .

But then our leading lady Maggie told the story of her twelfth birthday and how she went to the Toys R Us to find something special that would show she was not a baby anymore and decided on . . . .

Seriously. What a pansy! Nothing even happened and I had to put the dang thing down. Boy did I talk a big game of “ooooh it’s gonna be stormy tonight and Imma read the shit out of the scurrrrrry book” only to want to hide under the blankets like a big fat chicken instead. Once I picked it back up what did I find????

“You shouldn’t play in there. Bad things are inside.”

I have no idea if anyone else will react the way I did. I will say if you’re a woman (and quite possibly a man) of a certain age and read about the soundtrack in the background during the first Ouija session which included a song by a band called Echo and the Bunnymen, but which was currently offering up a selection featuring a haunting children’s choir “harmonizing something that sounded like the commandments” there’s a good chance you’re gonna be all . . . .

And automatically want to give it all of the stars. Seriously . . . .

Hell, this story might have sucked. It was kind of a hodge-podge of themes with creepy dolls and creepy kids and creepy board games and creepy deaths in the family and creepy creepy creepy. I’m pretty sure I blacked out and spent a couple of hundred pages fantasizing about Kiefer Sutherland, Jason Patrick and Jamie Gertz after that Cry Little Sister reference and that right there is good enough to dole out a 4. Now, if you’ll excuse me I have something important to take care of. Like immediately digging out my copy of . . . . .