“I’ve never done this before. I just know I’m falling for the girl I married.”

So last week someone clicked the ol’ likey like button on one of my old reviews, and since I am 100% geriatric and suffer from C.R.S. (that’s Can’t Remember Shit for those of you not in the know) I didn’t even know what the heck book it was. When I saw the author I was all “why does that name sound familiar” and then realized that I had this book by the same person checked out from the library . . . . .

You might be asking how I ended up with Roomies – well, I mean aside from the obvious reason . . . . .

Turns out this was one of those spammy things that appear in the middle of the GR feed and make you think one of your friends reviewed it buuuuuuuuuuut nope, it’s just an ad. Apparently it was a pretty effective one too because the pretty pretty shiny shiny cover made me go take a looksee at what it was about. Basically, if you enjoyed this . . . . 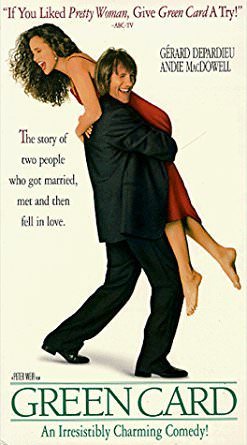 But if you are old you know what’s up and now you probably want to read it too. Marriage of convenience for a greencard = forced cohabitation and a crash course of get-to-know-you = start to fall in love = some angst about whether it’s real or pretend (and another thing I could have really lived without) = eventual HEA. The female lead was a bit spoiled for my taste (and kind of a creeper with her weird crush on the leading male), but eventually all was forgotten/forgiven because the dang thing was so stinking sweet with some bonus funny ha-ha moments. This is a prime example of why I try not to throw the baby out with the bathwater when it comes to all of an author’s books after reading only one. You never know what might be waiting for you . . . .