Our Kind of Cruelty by Araminta Hall 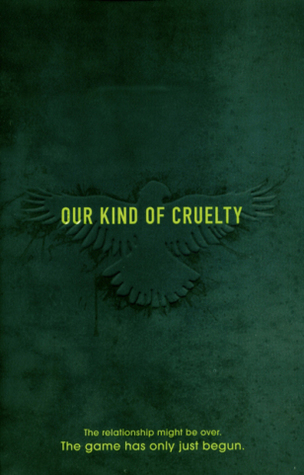 “I must be cruel only to be kind / Thus bad begins and worse remains behind.”

When I saw my friend Michelle’s review comparing this to one of my favorites, I went and requested it immediately. I spent the next 24 hours waiting with bated breath to see if I would be approved an early copy while simultaneously trying to lower my expectations. I mean, really, there can only be one You (well, actually there are two and supposedly another in the works and also a television program, but you know what I mean). Ever since Kepnes released her little sleeper and everyone’s favorite psycho book boyfriend into the world others have been trying to follow in her twisted footsteps – and I keep reading them. At this point I figured the comparison is similar to everything being “the next Gone Girl” and once I received my copy I was prepared for disappointment and would deal with Michelle accordingly if I hated it . . . .

This really is maybe the next You - with one difference: you won’t fall in love with Mike and it’s crystal clear throughout the story that he won’t be getting a happily-ever-after. The story here is of Mike and Verity. Theirs is a classic love story – they met at university and were together for seven years while each became quite the success in their respective industry. Unfortunately Mike engaged in an indiscretion of sorts while living abroad for work. That was when Verity stopped returning his calls and e-mails. Mike is not deterred, however, and knows he can win Verity back once he returns to London. He has the job, the house, the money – all that’s missing is the girl. And so what if she’s engaged to someone else and has invited Mike to the wedding. Mike knows the whole thing is a ruse – a game they play. After all, how can two people who Crave each other so much ever stand to be apart?

Mad props to Araminta Hall for going balls to the wall when it came to Mike. There was not one sentence where I didn’t believe I was in the mind of an absolute nutter. Again, I didn’t “love” Mike like I loved Joe, but boy did I appreciate his crazy effing perspective on things . . . .

Oh, one other note. PLEEEEEEEEAAAAAAASE keep the cover with the eagle on it and ditch that other ugly AF one : )

ARC provided by NetGalley in exchange for an honest review. Thank you, NetGalley!
Posted by Kelly (and the Book Boar) at 11:05 AM