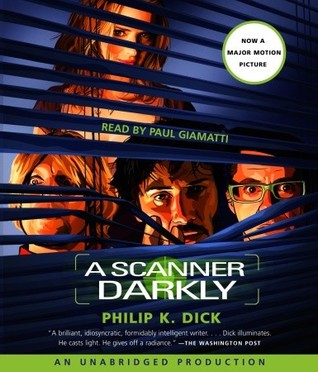 Not even February and I’m already behind on 2018’s reviews. Good thing I didn’t tell myself I’d lose weight! The one thing I’ve always told myself is I need to read a Philip K. Dick story. Imagine my surprise when I cued this one up on the ol’ Fiat’s Bluetooth and heard that it was written by Philip K. Dick. I’m not sure one story can be a quantifier for his entire set of works, but in the immortal words of Larry David, this was . . . . .

Since I listened to it, I don’t have any quotes to provide. I can tell you the story is sort of a “scared straight” type of tale – all about the perils of drug addiction. Our MC, Bob Arctor, is a small-time dealer looking to go big with the new drug of choice known as Substance D. He’s also an undercover agent known as Fred who is trying to bust a small-time dealer looking to go big known as Bob Arctor. Nope, you didn’t read that wrong. You see, one of the side effects of Substance D is that it causes your mind to break from reality. Bob is Bob when he is Bob, but thanks to Bob imbibing in some of his own wares he is also Fred trying to bust Bob when he is Fred. There’s a bevy of supporting characters that make this story more than worth the price of admission added in for good measure. Classified as “Sci-Fi” – a genre I don’t typically steer myself toward – would probably have been the right classification back in 1977 when A Scanner Darkly was originally published. Today? It’s pretty freaking realistic. Aside from the scanner suit, it’s like Philip K. Dick was a real soothsayer with regard to the future of drug use in America.

Not interested in reading or listening to the book? Good news! There’s a real trippy film version that’s like live action with a cartoon overlay (wayback machine has teenie bopper Kelly saying just like the A-Ha video!) starring Keanu Reeves . . . .