Fire and Fury: Inside the Trump White House by Michael Wolff 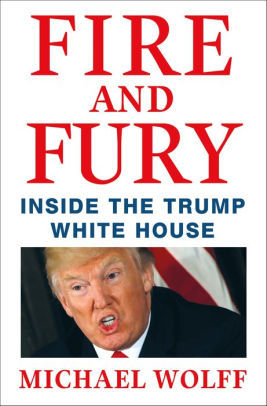 
When I initially posted the "review" below (based solely on leaked segments) the day before Fire and Fury was officially released, I had no idea my little bit of nothing would get as much attention as it has. I also didn't really plan on reading the book. But then somehow the library decided it should order SIXTY copies of the thing and I went from 90th on the wait list to it being my turn before even a week was over (many thanks to the patrons who either removed their names from the list or made a point to return the book right away so everyone could get their chance) and there was a snow day so I had no excuse not to dive right in. So what do I think now that I'm finished? Well, I think we elected fucking Fredo to run our great nation . . . .

I stand behind everything I said before. This was indeed simply a "tell-all" as I originally believed and probably contained a "bigly" chunk of tabloid journalism (which surprisingly focused A LOT on the Bannon/Jared & Ivanka relationship). It's convenient that one of the most quoted figures in the book is Roger Ailes who is now dead. But at the end of the day does it really matter which quotes are real or who leaked what when it comes to sort of a "National Enquirer" type of bestseller? Trump said it best when he said the following about his supporters:

"I could stand in the middle of 5th Avenue and shoot somebody and I wouldn't lose voters."

If nothing else has been confirmed for me since the inauguration (aside from the fact that Trump had the biggest crowd ever in attendance *eye roll*) it is Trump's own quote above and this point that Fire and Fury makes over and over and over again . . . .

"He could not even attempt to imitate decorum."

And THAT is something that no one will ever be able to fix when it comes to this 71-year old man. Let's just hope America wakes up by the next election before Trump turns our country into a "shithole nation." : (

Today our Führer is attempting to prevent this book’s release. People quoted in the book are also coming forth denying they said some of the things attributed to them. If a copy of this (literally) falls into my lap – like from the sky while I’m sitting on a park bench or something – I may read it. As for what has been leaked so far regarding its contents? All I have to say is . . . . .

OF COURSE Trump didn’t think he would win the G.D. election. No one in the universe did. He put his name in the hat as a marketing ploy for his failing brand. Unfortunately for America, no one drinks the Trump Kool-Aid as well as Trump himself so once he was told there was a chance he could win he brainwashed himself into thinking he was qualified for the job.

OF COURSE he sleeps in a different bedroom than Melania. Melania had ZERO intention of ever moving from her gilded penthouse in Trump Tower until the powers that be told her she was obligated to for the sake of public appearance. It’s not like she really hides her distaste when it comes to her husband . . . .

OF COURSE Rupert Murdoch called him a “fucking idiot.” HE IS ONE. I guarantee Tillerson called him a moron too.

OF COURSE he is so delusional he believes someone would poison him. Hell, it’s probably someone in his own family … or someone who married into his family only to be used as a patsy.

OF COURSE he hates the Obamas. Every single move he’s made since being elected is an attempt to delete Obama’s footprint from the history books. At this point one could only be thankful if the reasoning behind Trump’s disdain is because they were “very arrogant” rather than because The Donald wears a white robe and hood around Mar-A-Largo on the weekends.

OF COURSE Ivanka has her eye set on being the first female president. It’s pretty obvious at this point the Trumps like to fancy themselves as a new and not-so-improved version of the Kennedy clan.

OF COURSE Trump doesn’t read or “really even skim,” but instead engrosses himself in television viewing in order to see just how “fake” the news is that day in order to be able to Twat about it while taking his 3:00 a.m. constitutional every night after his handlers have retired to their beds. Is it really surprising Trump isn't a big reader? He is, after all, the dude who has “the best words” such as . . . . 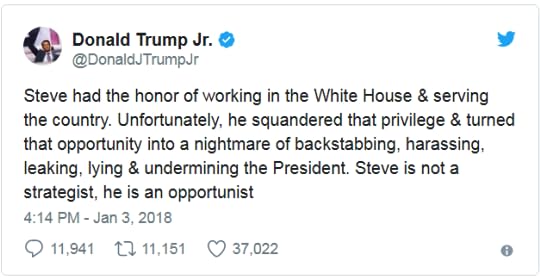 Once again DUH MOTHERFUCKER. You were the only one stupid enough to believe a fucking white supremacist had the best interest of the country at heart.

OF COURSE everyone who works in the White House right now hates everyone else. Kelly hates everyone most of all. Thank Jeebus he loves this country enough to keep trying to stomp out the dumpster fire which is this presidency with his bare feet every day.

Was I the only person who equated this release to a Kitty Kelley sort “unauthorized biography????” Now, thanks to Trump and his merry band of minions – along with their cease and desist demands, this is sure to be a bestseller . . . .