Everything Is Awful by Matt Bellassai 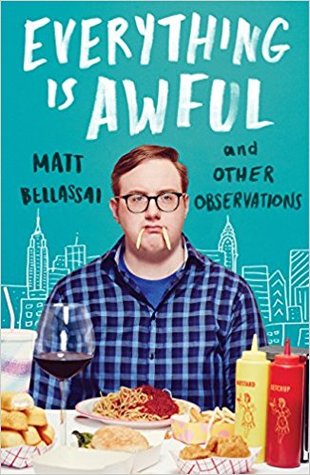 
When this popped up over at the pornbrary’s “Recommended To You” page I didn’t have to do anything other than look at the title before hitting the request button. I was ready to declare once and for all to the pornbrarian that . . . .

But then I realized maybe he/she doesn’t know me quite as well as I thought they did because there were like eleventy-four people ahead of me in the queue and I very much have the mindset that This Is America and OF COURSE I Want It Now! Mind you, I had no idea who Matt Bellassai was. I simply bemoaned the fact that my entitled butt would have to wait a hot minute rather than receive instant gratification. Then I did what I do best and forgot all about this book until finally my turn did come around and I checked out the synopsis.

Here are some things to know about me:

1. I still don’t really know who Matt Bellassai is, although his book made me laugh the terrifying “what if I lart” (definition below) laugh that happens when old ladies attempt to contain their guffaws whilst reading at work.

2. I’m not positive I know what a Buzzfeed is either and no I’m not interested in looking it up, but apparently that’s how this guy initially became famous. (I think there was some other Buzzfeed thing that I wasn’t familiar with and some of you tried to explain to me, but alas I am dumb and also maybe have early onset dementia so I don’t remember any specifics.)

but I feel pretty comfortable saying never here) spend my free time watching You Tubers or vloggers. (I started jotting down my ramblings simultaneously with reading this book, so I now know that Bellassai isn’t a traditional “You Tuber” – I think – maybe, but he did do a video on the internet that went viral so tomato/tomahto.) My husband and friends can’t even get me to watch Netflix and that is a simple button on my remote that I don’t know how to work, but at least I know exists. I refuse to use a computer once I leave the office and my phone is for making phone calls (and about twice a week to send a text it takes me 14 years to type out since I insist on using real words and punctuation). I have nothing against You Tubers or viral videologists – I’ll just be leaving the addiction to watching their videos to the youth of the nation. That being said, I have still not taken a gander at Bellassai’s (apparently People’s Choice Award winning) web series.

4. I frequently complain (even when I enjoy their stories okay) about youngsters who write memoirs because they haven’t lived long enough to have accrued experiences that fill a “life story” and instead seem to be cashing in before their 15 minutes of fame runs out. That’s why I’m choosing to call Bellassai an “essayist” à la David Sedaris. His stories may be about himself, but they are presented as snippets of life rather than an autobiography and also because I am allowed to be as fickle as I would like to be.

Okay, so now that you’ve had to endure allllllll of that overshare, here’s the point: I was not and am not familiar with Matt Bellassai – something I’m sure he would be completely comfortable with since I highly doubt middle-aged, fat, married women are his target demographic. That being said, this book was FREAKING HYSTERICAL – to the point aforementioned that I was more than a bit concerned I might laugh fart (a/k/a lart) since I was trying my best to not allow any raucous sounds to escape my body from one orifice and that those sounds would therefore choose a different one. And although I’m almost certain that I am nearly old enough to have birthed this boy (should I have chosen motherhood instead of high school), we are of one mind when it comes many different topics and especially to one particular terrifying entity:

“Say one wrong thing, however innocuous yet hilarious you think it may be, and you become Teenage Girl Enemy Number One. I’m chubby, gay, pale and a whole decade older than most of them, which means I might as well wear a sign that says, “Hello fellow Internet users, please destroy my entire life.”

If you are in need of something light that will confirm that - no, your new mascara is indeed not waterproof, this might be the book for you. Now I have to make an exception to everything I said up top and FINALLY Google this cat in order to watch the Drunk at Work or whatever the fuck his shit is called before my friend here at the office bludgeons me to death with my stapler : )

IMMEDIATE EDIT: Google search officially complete (or as complete as I want it to be which means I watched one video and now I'm going to figure out what book I'm going to read next). I deactivated my Facebook account around a month ago for all of the reasons listed HERE. Matt Bellassai is my Patronus.