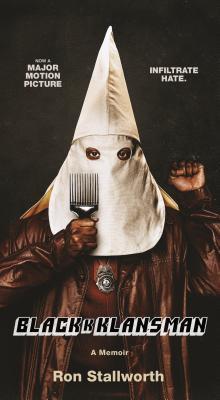 “Success often lies not in what happens but in what you prevent from happening.”

Here is a case where the movie is guaranteed to be better than the book. No offense to Ron Stallworth, but Spike Lee does words for a living and you, my friend, were a policeman. I’ll catch the film . . . . eventually. Most likely when it hits the overpriced movie channels/subscription services I fork over my hard earned dollars for every month without ever really utilizing them since I am not a big movie watcher and generally choose to read my films (shocker, right?). For now, though? Trust that despite the presentation mainly consisting . . . . .

And an overabundance of oversharing unimportant details (mainly in the form of initialization), the story of how a black man answered an advertisement and became a (literal) card carrying member of the KKK is most definitely an interesting way to pass the time. As with every memoir, I believe some liberties with the truth have been taken (specifically, pictures or it didn’t happen – “losing” what could be one of the greatest photos of all time doesn’t quite pass the sniff test.)
Posted by Kelly (and the Book Boar) at 7:00 PM