This Will Only Hurt A Little by Busy Phillips 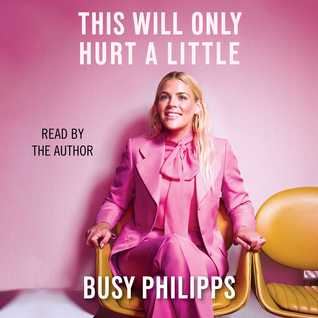 I grabbed this because I’m always searching for something easy to listen to during my commute. Confession time: I never watched Freaks and Geeks (and neither did any of you because it was cancelled for lack of viewers despite being critically acclaimed, so just stop lying about it) or Dawson’s Creek. Really the only things I can recall Busy Phillips being in were White Chicks and Cougartown. I didn’t realize she was the exact same person in real life that she played in those roles . . . . .

The only thing I can say now that I’ve finished? Self-awareness and accountability are real things. It’s a shame an almost 40-year old woman hasn’t figured that out yet and instead seems to be A-Okay being wholly unlikeable with zero redeeming qualities. But at least she’s internet famous, right? #sarcasm
Posted by Kelly (and the Book Boar) at 7:00 PM