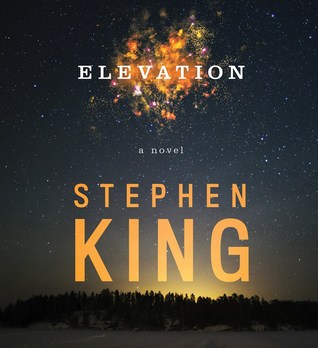 Elevation isn’t what you would typically expect from someone known as the “Master of Horror.” It is, however, most definitely a story you might expect to hear from your favorite relative – Uncle Stevie. Simply put, it’s a puff piece. A little feel-good story about not judging books by their covers and finding a higher plane (either figuratively or perhaps in this case quite literally).

Back in the olde days of yore this probably would have been nestled somewhere in a collection of other novellas rather than being released as a solo work. The lack of quality wouldn’t have been as noticeable because the quantity would have made up for it. If you have a great library system like me or are a King completionist, it’s worth the little time it will take to read. If you’re neither of the above, you might want to jump into your time machine and listen to some Depeche Mode instead . . . .

Sidenote: Am I the only person who finds it strange that King felt the need to narrate this himself or that bookpushy “blog” posts have become commonplace from his people . . . .

WTF? We aren’t called Constant Readers for no reason, dude. If you write it, we will come. Save the spammy self-promotion for the “Pumpkin Farmers” and overpriced self-pubbed authors of the world.

EDIT: No comment regarding this winning “Best Horror” in the Goodreads Choice Awards.
Posted by Kelly (and the Book Boar) at 7:30 PM