And Then There Were None by Agatha Christie 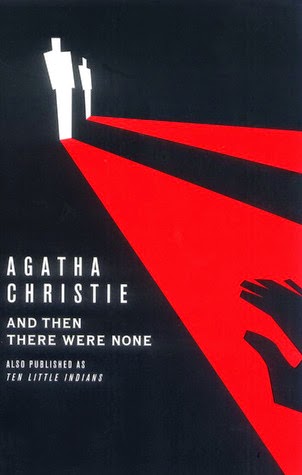 4 Stars
WARNING: IF YOU DID NOT LIKE HARPER’S ISLAND – CLICK AWAY PRONTO ‘CAUSE I’M GOING TO HARPER’S ISLAND THE POOP OUT OF THIS MO-FO
Still here? Okay, let’s get on with the show.

Upon starting And Then There Were None, I found myself feeling extremely . . . giddy. WTF is wrong with me? Normal people don’t get all smiley when they begin a book where everyone and their dog is going to get murdered. I need professional help.

Generally in the summertime I follow a couple of traditions faithfully:

1. I read a lot of nonsense while sitting poolside (preferably with a smuggled-in piña colada or margarita in hand); and

This summer I’ve kind of broken free of the confines of Rule #1 - not saying I haven’t read some fluff, but I’ve been heavy handed in choosing more thriller/horror novels. Maybe it was the abnormally cool temps that not only kept my toes out of the water, but also helped me keep my wits about me?

Whatever the cause, I’ve had some serious quality reading experiences this summer. Endless thanks to
twelvejan [Alexandria] for bringing this classic tale to my attention. I had read a handful of Poirot stories back in the Paleolithic Era, but found them to be just “okay”. After reading And Then There Were None, I think it might possibly be Agatha Christie’s best work.

Ten strangers, each with a skeleton in the closet, are summoned to an island by a host who only appears as a voice on a recording accusing the guests of murder. What follows is the death of each person

Until no one is left.

Okay, so maybe the murders aren’t that gruesome, but we are talking about a 75 year old book here. I was amazed at how well it stood the test of time and how it had me gripping the edge of my seat in anticipation. And though, at the end of it all, you may claim to have known who the murderer was all along, you mustn’t forget all the times you changed your mind (because your choice of killer was one of the 10 little soldiers who happened to fall).

Recommended to? Anyone looking for a quality murder mystery.

Now for a couple of wishlist items:

2. Someone plan a murder mystery party and invite me. My only requirement is that I get to wear a wedding gown and have the murderer chase me through the woods.

You say you don’t live near any woods? No problem – you can have the party at my house. Just make sure you warn everyone that there are some REALLY weird looking dogs that occasionally hang out around the doghouse.